The very idea of fashion is one exciting conglomeration of a range of different attributes, each of which has lent itself to endow this requirement of lives with an essence unique in its coming across as myriad a projection in totality. From the sensuous ideals of aesthetics and style to the ethics of its dwelling in comfort and functionality, touching upon every physical identity of the human kind sometimes encompassing the entirety of that part and at other times only sufficiently resting on its surface, the phenomenon of fashion never fails to unfurl its charisma even along the most characteristic commonplaceness stemming from its core.

Exploring to perfection such requirements that fashion has always been, albeit when numerous interpretations have been managed to avail out of its domain, might seem like a modern day job that the inward looking folks prioritising the individual choices and essences would more adeptly work out from this zone of what is largely considered a way in self expressing. In very prominently singling out the embedded pursuits of comfort and sustainability and the like from this diverse understanding of what sums up fashion, it would be the supposedly more conscious new world that is more likely to pursue fashion as a means in exhibiting the flair that one bears within themselves in their very existence as precious humans.

The idea might seem a bit contradictory to the flourished sophistication and casual charm that modern day instances of fashion evoke courtesy its decking up along such lines of the bold or the subtle alike. But for a whole new way of existence that identifies as one contemporary in its prevailing currently, fashion has come to characterise a greater freedom and empowerment in the unrestricted limits of its being and doing.

And yet, this new age idea in fashion being the ultimate standard in the comforting and individual idea of the self does not mean that traditional expressions of what has conformed to many a fashion elements has always been steeped in its origin essence of ‘making’ as in what would roughly occur as some sort of styling. For all over the world and through different periods of time and even in its beginnings in necessity, fashion has managed to make space for both functionality and flair to emerge as its basis in identification. Forget the corset for a moment and numerous wacky fashion standards and stereotypes for some additional moments thereafter that the world has been (in)famously entertaining of and this expression of life would amount decently enough to be a facet of existence convenient first and charismatic later.

It is across such trails of its spanning in character that fashion has seen many some traditional, ethnic identities marking the way of its essence in those ethics of convenience and feasibility that substantiates indeed its continued and even basic defining as something innately attuned to attend to the lifestyle needs of the human. Even advancing miles and ages further from the origin ‘ensemble’ of leaves and barks of trees and animal skin and hides and a fashion more rooted in civilisation still unfurls as a melange of compositions in some of the most exotic natural elements and raw materials of its making.

Of course, the organic, cruelty free and such other maverick dimensions worked into the fashion expression as a modern day realisation of a long due ethical responsibility tend to be a much pronounced reinstating of the core crux in which this widely acknowledged necessity of life dwells. And while that has been a development facilitated by the advances of technology and the science of innovation, fashion has also forever stood true to its expressive ideal in terms very indigenously and primitively traditional.

From dresses to shoes, from accessories to jewelry, from decor to dwelling, every aspect of fashion has been abundantly esteemed in the wealth of traditional riches that speak both of luxury and essentialism. Encountered pretty much in every culture the world over are such immensely natural manifestations of fashion that serve indeed the purposes of style and suitability. Impeccable thus in their very assertion as fashionable items of functional excellence, it is such traditional specimens in wearing and donning and being and existing that make for rather intriguing displays of the multifaceted extravaganza that fashion is.

Drawing mostly upon such ideas and materials very exclusively local and at times very natively important as well, and designed also in some spectacular command of craftmanship, such ideas and expressions of fashion serve also as identities themselves alluding very assertively to some certain region or specific tribe after which they even take their name. As bespoke beauties whether of doing or of being, these works of artistic craft redefine therefore fashion with a consciousness worthy even more of that remarkable viewing in which fashion is recognised.

Emerging as such wonders of the fashion world catering to its particular premise of what enables the style of walking, footwear indeed, are many a traditional Indian types that has long held their identity as traditional, regional and fashionable doling out of functional style. From the more popular juttis and kolhapuris to the rather distinctive pulas and paabus, the truly Indian mode of walking wear has always been a sole affair in uniqueness. But out of them all very traditional indeed curations of footwear, it is the Pula chappal of Himachal Pradesh that stands out still in its more unique specifics.

Of course the material of their make is one immensely natural but one that does not rely on the conventional popularity of the leather relying Kolhapuri or the wooden Paduka, each of which stems of some matter not very curious indeed to the world of physically usable craft. A hand crafted wonder indeed and made out of very surprisingly certain strands of fibre derive ultimately out of a grass is the Pula chappal that somehow do not command the same popularity as does the jutti or even its Himachali counterpart of the leather Chambal chappal that even boasts a Geographic Indication tag to its name.

Instead, the Pula remains more a very regional specialty, particularly existing in the upper reaches of Seraj village and also in Chad village in the Banjar region of the state. The ethnic footwear of the local Pahadi folks, these are insulating form of a footwear that also allow greater and more efficient walking around upon the snow clad terrains of the hilly state of which it is an identity. For indeed, as the state shoe of Himachal Pradesh, the Pula is distinctive not just in its make and functionality but also in its ‘piousness’ that even renders it appropriate enough to pass off as temple footwear!

This notion of the remarkably eye catching Pula manifesting in this uniquety of marking the premises of even religious places not allowing of any other kind of footwear, however traditional and regional or natural is what sums up the very origin and history of its being. Legend has it that leather footwear was deemed impure for the Land of Gods that the dev bhoomi of Himachal Pradesh is which made the locals make use of an indigenous variety of bhang considered sacred to craft this special type of footwear that could serve so many purposes in itself.

Feather light indeed in their grass derived essence, pulas are made by plaiting the fibre of the indigenous bhaang- the grass of shale- into ropes that are then stretched, twisted and intertwined to ensure their sturdy durability. Stitched together with a cloth lining so as to sit softly against the skin and rendered vivid with some deft needlework etching out vibrant patterns in contrasting wool through blanket stitches, these seemingly woven designs is what characterise the zesty appearance of the pula chappal as one unique in its unmissable appeal.

Pretty and different to the eyes, warm and fuzzy for the feels and esteemed enough in their essence of both the fashionable and the essential kind, these slip ons imbued with the characteristic charm of the very Himachali existence stand as true as they can to the ideals and ethics and spirit of what makes for the multifarious expression of the self in terms of fashion. Slowly expanding their ambits along the Indian expanse particularly the states of Rajasthan, Gujarat and Madhya Pradesh and promising also a greater global hold courtesy their immense steeping in uniqueness, the Pula chappals represent a fashion phenomenon that adheres to the strand of the striking making up this cosmopolitan importance in lifestyle choices. With style and substance embedded deep in its structure and encompassing even the wholly significant fore of sustainability that fashion, like all other expressions of the existential has been increasingly calling for, this traditional Himachali rendition in its crafting eloquence of the fashion art makes for a style statement ‘high’ in all assertion of sense and sensibility. 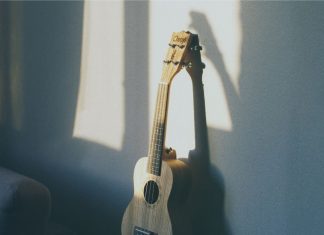 All About The Ukulele