Pretty and petite, elegant and flirty, gorgeous and feminine, skirts are one of the most versatile dress elements that cater to the women’s wardrobe. Less lauded and lesser explored, skirts however make more of a splash in the style segment with fashionistas. Every day fashion does not incorporate the magnanimity of the skirt in as wide a manifestation as it should in its numerous types. Naturally a wide variety of skirt types emerge as unique because of their lesser known skirting expanse. Here’s 24 such unique types of skirts that will definitely help you up your fashion game like never before-

It’s easy to see why accordion skirts are thus named- they indeed look pretty much like an accordion in their chic avatar. Basically a pleated skirt, the accordion types of skirts are however distinctive in that the pleats hold their shape even when they are allowed to loosen out. They are very breezy to both the look and the feel which obviously makes them pretty comfortable to wear along. Also because they have that flow to them, accordion skirts are super flattering.

Whoever hasn’t heard of bodycon dresses? But in spite of their instantly perceptible appearance, bodycon skirts remain relatively lesser known about. A figure hugging, stretchy skirt, much like its dress counterpart, bodycons trace your silhouettes thereby enhancing that diva like posture you innately harbour.

Flaring out from the waist on either side from a fitted waistline to falling straight on the knees, the bell shaped skirt might sound like an unfolding drama that unfortunately did not manage to make it happen. But this among the many types of skirts can be a really elegant pick because of the dramatic aura it encompasses within its flared confines. Aptly named the bell skirt, this is one type that will instantly set off the fashion bells ringing!

Perhaps the most distinctive among all those types of skirts that exist, the bubble skirt is one really unique pick. With a hem that is folded back on itself, bubble skirts are visibly puffy, much as what bubbles are like. The effect of the folded hem below the flare becomes more visible when the bubble skirt is also a pleated one, which it is in most cases, though there are plain ones as well. You might love them or hate them, but you sure can’t ignore them. That’s how very blatantly apparent bubble skirts tend to be!

Lightweight skirts that feature crumpled pleats, broomstick skirts have to be among the most unique types of skirts around. A very boho look runs prominently through these breezy garments that can be a delightful semi- formal wear option even in their wrinkly, crumpled essence. Generally long and flowy, broomstick skirts are also comfortable enough to let you wander the entire day around town just like that!

Possibly the simplest types among all those skirts that line the waists of the world is the circular skirt. So named because the skirt resembles a circle with a hole when it is spread out, circular skirts are very full and flowy skirts that hug the waist but hangs casually thereon. Even without much movement, circle skirts tend to be bouncy, lively picks that sure makes for a fun casual attire.

No prizes for guessing what the cowl skirt is- it’s indeed that obvious! Cowls dominate the appearance of these types of skirts that tend to be hip hugging and therefore waist defining. The drape of the cowls tend to bring about a ruffled kind of look, that can be worn in any length you like. The cowls seem to flare out towards the bottom and in all their breezy volume lend a really eye catching look to any outfit.

Among the types of skirts that endow the desired fuller look is the dirndl skirt which emulates a somewhat bouncy essence. A straight skirt which is gathered at the waist and fitted with a waistband, it is the free flowing gathers that bring about the volume to the attire. It gives the wearer a twirl with all those cloth which is why lean, elegant gaited women make for really pretty dirndl donners.

While godet skirts are definitely one of the types of skirts around, they essentially are a manifestation of a wider fashion encompassment- the godet. The godet is an extra piece of triangular fabric set in dresses to bring about more flare to them by way of additional volume. Godet skirts are skirts that feature such triangles of extra fabric along the hems which means they are tapered on the hips before flaring out towards the bottom.

Even when how unique they tend to be, it is easy to misinterpret gored skirts with godet ones because there indeed lies some similarity in their essence. Like godets, gores are also triangular pieces of fabric that are inserted into garments. But gored skirts feature these extra fabric all along the length of the skirt unlike godets which run only halfway down their defining types of skirts.

Like pleated skirts and flared ones, tiered skirts also take their name from the very prominent design they manifest. Seemingly made up of horizontal tiers that range from being just a couple to multiple, tiered skirts are easy options to make a style statement in. Flared in essence and also somewhat bouncy because of the layering, tiered skirts look quite dressy and therefore are more appropriate for casual, fun outings.

We have been doing pleats all our life yet we shiver and shudder at the mere mention of a knife pleat! Okay that’s a bit dramatic but surely knife pleated skirts aren’t the most commonly encountered types, at least not in the name. With sharp narrow pleats- wider than that of accordion pleats however- that are pressed flat in the same direction, knife pleats are also called side pleats. Because knife pleated skirts feature tight, crisp pleats, they allow the wearer a graceful twirl which make up for its fancied appeal. The pleat pattern also is quite easy to spot even when you might not be aware about the name that characterise this style.

Of course paneled skirts are the skirts that feature panels- straight or twisted, many or few, cut out or tapered. Very versatile in that they can be almost A- lines or the fullest types of skirts you have ever seen, paneled skirts definitely skirt out a league of their own! Apart from the adaptiveness however, paneled skirts also are a hit in that they do not feature a bulky waist. Both a casual and a formal dress option depending on how wide or narrow you have paneled them out, these skirts are a definite must have in every woman’s closet.

High on flounce and flair, peasant skirts make for a really carefree look if you know how to wear them right. Among the wide many types of skirts, this version might be a tad difficult to carry off by all because they tend to hang on your body. Easy peasy breezy describes best this type of skirt which might therefore make a heavy bulge all the more apparent while equally exposing too bony a structure. Choose it right however and there is no end to how classy you would look even in casuals!

The pegged skirt looks very much like what it sounds. With a waistline that is evidently way fuller than its tapered hemline, pegged skirts can well classify as pencil skirts. But they tend to be generally ‘fuller’ instead of tapering all throughout like the pencil types of skirts thereby lending them their own unique appeal. Closer to a wedge shaped look, pegged skirts help balance out lean hips lending you a fuller, more flattering look.

Peplum types of skirts are perhaps among your best bets to make really striking style statements. With an extra layer of fabric around the waistline, the emphasis is undoubtedly on the waist. Short, gathered and slightly flared, the extra layer adds oomph and sophistication to your look apart from lending an enhanced flounce to the skirt. Despite its extravagance however, the peplum passes of quite well as semi formal and even formal wear.

One of the rather unique types of skirts, the poodle skirts isn’t distinguished only by the poodle figures they sport. These skirts are generally wide swing dresses that come in a solid color and features also a poodle though there are variations with other such appliques attached thereon. Not just the figurine poodle however, poodle skirts also embody the name in their very design which lends the skirt to poodle on the floor when you sit down.

You might well consider prairie and peasant skirts to be the same since they are quite similar. Generally a long full skirt with a gathered waist and some ruffles or tiers, a prairie skirt however can also be only slightly flared in which case it might resemble the peasant look. Either way though, carrying the look seems a carefree way of everyday fashion even when it is indeed slightly flouncy!

One of those chic skirts that sits firm along your silhouette, snug and fit, sheath skirts encompass a style option that is equally ideal as a casual or a formal dress option depending on the pick you make. Sheath skirts might be somewhat confused with pencil skirts, perhaps the only difference being that the latter is a more tapered variety towards the hem.

Accordion, bell and now trumpet, skirts sure sway to a music of their own! The highlight of the trumpet types of skirts are their hems, which flares out ditching the fit it had maintained all throughout. But there is no denying the drama that this unexpected sartorial move brings on to your overall look, what with that sudden flare definitely designed to romp up your stunning style statement.

It’s surprising the yoke type of skirts aren’t very popular even with the tremendous ease and flatter they tend to bring to your everyday look. Yoke skirts have the yoke above the skirt and therefore tend to seem distinctly two layered. Since the yoke happens to be at least some distance wider than the regular waistband, these types of skirts are perfect to smoothen out unflattering belly bulges while also helping make a statement with that well defined appearance. Another very favourable aspect of yoke skirts is that they can be worn gathered or pleated or plain or any style that suits you best. 9 reasons why a guy from defence is every girl’s ultimate... 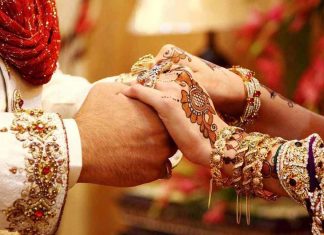 Interesting marriage trivia to get the ‘shaadi season’ vibes unto you