Years ago somewhere on a ridge along the Himalayan foothills, relishing small raw oranges cut into halves and sprinkled with salt and chilli powder, little did I realise that memories of the foodie kind was being created inside the confines of my hippocampus…still the tangy…pungent taste of those oranges bring tears to my eyes…the tears of joy…the rekindling of childhood memories…the nostalgia of food…

Humans by evolution are designed to consider food as the prime source of their survival, which in turn has trained their brain, the hippocampus to form memories about food. A Harvard University Study says, “ Food is an effective trigger of deeper memories of feelings and emotions, internal states of the mind and body…it also says that everyone has food memories, some good and some bad…” The researchers have found out that memories of food is not only restricted to the tangy orange halves or a piece of candy or your grandmas’ pot of chicken broth but also to the place and setting where you relished that food!

Food memories in India are varied as its vast culture and food habits but certain iconic eateries, over the years have made such a strong connection with us that food memories of a particular dish or food served in these eateries are pathways to the lingering taste of nostalgia…..

Though the “Chelo Kabab” is an Iranian dish, the Peter Cat restaurant in Kolkata claims it to be “the protected regional product of West Bengal “ in its menu! Why wouldn’t it? You will get the answer in the long line of people hovering outside the restaurant, waiting for their turn to get tables in this iconic restaurant just to sink their teeth into the succulent kebabs served atop a plate of aromatic butter rice and a full poached egg! The “Chelo Kabab” of Peter Cat has one set of chicken kababs & two mutton seekh kababs with lots of flavour and a “melt in your mouth” texture.

P.S : The Chelo Kebab is the national dish of Iran and the oldest restaurant serving this dish is the Nayeb Chelo-Kabab Restaurant locates in Tehran and established around 122 years ago.

Cutting Chai and Mumbai…go hand in hand along the many street corners of this “Jaadu ka Nagri” (The Land of Dreams)…and cutting chai is literally nothing but a half glass of tea (Mumbai drinks its tea in glasses and not cups) The hot tea served half in a glass has become a symbol of the spirit of Mumbai…always on the go…moving endlessly towards the unknown dream…striving inspite of all odds with minimum time, space and resources and rejuvenating the human spirit with  a cutting chai!

The cutting chai served at the historic Prithvi Theatre cafe evokes many memories of the artsy kind…there can be no artist, Bollywood or otherwise who have not sipped this half filled glass of the hot beverage to restore his self and soul….memories framed and fixed to the hippocampus where it should be…mention Mumbai…struggle…joy…success…even pain and the lingering taste of nostalgia is sure to emerge in the form of the smoke lines emanating from that cuppa cutting chai served at the Prithvi Theatre….

P.S : Prithvi Theatre in association with TIFR (Tata Institute of Fundamental Research) presents a monthly forum to discuss interesting scientific issues outside the traditional academics under the aegis of “Chai &Why?”

Red brick walls..a huge creaking fan and an ambience of the pre independence era sets the aura of nostalgia even before you dig into the food for memories of the bygone times. A place which best describes the Bangalore that was…a  cool, quiet, colonial settlement catering to the slow, relaxed lifestyle of the “retired from service…”Koshy’s on St. Mark’s Road is still an island admits the hustle and bustle of the new age computer generation Bangalore.

Although all Koshy’s regulars swear by the coffee served here…they say that the coffee at Koshy’s is not just coffee, it is an emotion…it’s the traditional Sunday English Lunch that revives the memories of the Raj…the classic chicken roast served with the perfect mashed potatoes..boiled vegetables and a peppery gravy…fish’n’ chips…the prawn biryani…mixed grill…all washed down with chilled beer…and your Sunday is made..just the way it should be…

One of the oldest Irani bakeries in Pune, the Kayani bakery was established in the year 1955…sour dough bread and the Shrewsbury biscuits are the two most famous products of this bakery. Shrewsbury is almost synonymous with Pune…pale yellow rounds of joy laden with dollops of butter and sugar and packed in cardboard boxes are sold out within a few hours each day! Bringing back a box of Shrewsbury biscuit is almost mandatory or anyone who visits Pune….The owners swear that only the wood fired ovens are used to bake these iconic biscuits…and the bakery still carries its old world charm of marbled floors and brass ceilings…and of course the scent when you enter the bakery …heavenly….

P.S : There have been records of people fighting to get hold of their box of Shrewsbury biscuits, near stampedes have also been reported at times near the Kayani bakery!

“With or without?” a question asked by all street vendors in Varanasi…related directly to whether you want Bhang or Cannibis in your glass of butter milk, the fried fritters and the likes…the city and its streets are legendary as its bhang laced thandai…the signature beverage…made with cold milk, sugar, almonds, cashews and a dollop of bhang…”The Kashi Especial!”

As the Thandai rules the liquid space…so does the small balls of fried chick pea fritters mixed with crushed leaves of Hemp, spinach leaves and spices…the “Bhang ka Pakora!” Jwala Prasad’s Rasedar Pakora sold at the Lahurabir Chowk every evening is the finest in the city….these pakoras have two variants, the “sada” (plain) and “ rangeen” (colourful)… tis the rangeen version which is stuffed with bhang…

Though these hemp leaf fritters are a speciality during the festival of Holi in the month of March…the streets of Varanasi sells these iconic pieces of fried ecstasy through out the year for its aficionados….

P.S : Varanasi not only does the Bhang Thandai and fritters, you can even enjoy “hash cookies” and chutney or sauce made of hemp leaves to give you the trip of your life! 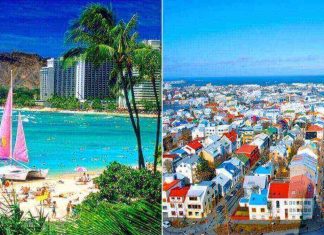 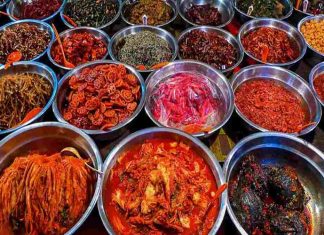