Adding to cart, listing as favorites, buying now and finally checking out are the steps that entail the shopping experience of the current times where shops do not even really exist and yet the activity in buying could not have been any more hassle free. Whether it be in assertions of transparency that relates to comparing prices across different sites or the convenience in picking exactly the brand and company of one’s choosing as well as the assurance of a home delivery, online shopping has proved to be a major boon of the fast paced world. Not to mention how the times of the coronavirus has virtually put a full stop on all things physical and shopping over the network of the web might be the easiest and most secure way of bringing home the essential, the necessaries and the luxuries alike.

Online shopping sure is a craze in its own; the very prospect of browsing through an infinite assortment of items of every kind possible all together though listed in handy categorisations of them make for a great past time as well, with also the probability of chancing upon some steal deal making for even greater an aspect in favourability. The process also is as simple and unbothering to follow- no bargaining, no heckling, no pondering over whether or not you are getting this at a fair price and so on and so forth. In therefore its prominence as a modern means of going through life in one of its many ways in part necessity, part indulgence, online shopping is an indispensable feature of today’s existence- an experience that is relaxing as well apart from its obvious deliverance of the service for which it is scouted. And yet like all things modern, or more aptly like every thing uniquely different and distinct from each other this frenzied take to the digital medium of shopping that comes across more as tech savvy than as titillating in the trademark euphoria of buying and purchasing, online shopping does not obviously score exemplarily across the same parameters when compared to the good old way of shopping in all enthusiasm of physicality as well as across the buoyant pleasures derived out of it emotionally.

For all its limitations and inconvenience and time consuming ‘agenda’, shopping the old way in brick and mortar stores, whether they be the big departmental stores and supermarkets housing everything under a single roof or the more definite dimensions of the local corner shop, this rather physical mode in ‘going on a shopping spree’ indeed in all true spirit of it is an experience altogether vibrant in its own exclusive charting of the shoppers’ territory. This very case for what makes an ‘outing’ in all necessitated essence of it can occur as a tedious routine for some at some times while presenting itself as an exploration in excitement in other occasions of understanding. And it is within such expansive limits of this experience of the traditional, or the original way of shopping that make shopping in physicality so very diverse and dynamic an activity carried out in all necessary fancies of undertaking.

Anyone who has indulged in their shopping urge in a comprehensive space of what sums up supermarkets know indeed the allure of ambling along from aisle to aisle, on the lookout for staples to tick off their grocery list but enticed perhaps more by such stuff not really making the cut to fit in within their monthly budget. And as they pick up one item after the next, they find themselves making allowance for another of those goodies to somehow squeeze in right next to the absolute essentials, conjuring up therefore a home pantry in not just a wide variety but also in entailing an experience not otherwise integral to that specific residence of the universe. Whether that’s a good thing or bad thing is a matter of different consideration but the very act in picking up something not hitherto holding much value to them before combines in itself a quaint charm in some excitement. And as one discovers in that new buy of theirs a certain attribute that endears itself to their person and/ or their household, there emerges therefore a different fore of necessity of which one would be earlier oblivious. How that bodes for the financial aspect of existence of entire families or of oneself might be some cause for concern but the very gratification availed out of such acts constituting indeed one of the simpler pleasures of life more than makes up for the strife to follow. In hankering after a pursuit eked out of life though nothing like some serious exploration in self discovery but still rewarding in its own sweet, simple way of making for a happy purchase, the physical mode of shopping constitutes a whole world of excitement that is worth scouting out in every element of it.

Offline shopping might also double up as family time for some people too pressed otherwise between the demands of daily life and living to make time for togetherness. And even in its assertion as a ground flimsy enough in its pretext of something as mundane as (grocery) shopping, the emotion of it is still relevant enough. Indulging in those nostalgic yearnings of the years gone by of carefree childhood, when a weekly run to the kirana shop at the nukkad with father dearest or an occasional stopover for some candy treat on the way back from school with mommy dearer made for experiences in much joy would be such assertions of the physical ‘shopping’ thing in all unfussy mannerisms of its working. And more than the leisurely gait of family shopping usually witnessed at shopping malls and big markets or the big rush that characterised the essential festive shopping indulgence, it has been the simplistic regularity of buying things at the local shop that makes for such fond memories in joyous existence.

Gaping at the colorful packets of chips that hang enticingly upon the threshold or scanning the display counter for one’s favorite choice of chocolate or eyeing in fact the newer entrants among the biscuit collection of myriad essences even as the elders we would be accompanying would inevitably strike up some small talk with the dukandaar, routinely damning the government for the price rise or taking displeasure instead at the weather these days or perhaps obtain some significant information of someone of the locality, the appeal that rested within these humble precincts of not much show and flair counts today as something more precious than ever. Amidst the sacks and sacks of rice and flour, dals and pulses and the cartons of snacks and spices, detergents and soaps and even in the hidden lines of miscellaneous identity, there lies still the essence of these neighbourhood grocery shops that still continue to be not anything few and far between across the length and breadth of our country unified in its concept of the kirana store. From getting candies in lieu of the all important ‘treasure’ of loose change or in asking the shop uncle to write in the khata, the emotions too flowed along this activity of necessary prerequisites in which the pride of familiarity and the assurance of faith played such important roles in earning lessons in life and living that no amount of money could ever buy.

Moving beyond these all encompassing worlds of what attended to the unexciting premises of regular life and venturing instead into such realms that mark the most prominent understanding of shopping as happy purchases in fashion and accessories and the feel of the experience is still uniquely removed from the now ordinary prominence of online shopping. A ‘trip’ to the locally grand bazaar of the city made for as necessary a preparation for the festivities to unfold as did the actual festival itself, with that particular day of all calculated convenience dawning upon one and all a certain excitement beyond description. And thereupon begins that much exalted universal ideal of the shopping spree, going from shop to shop in search of the one dress that would fully have our hearts and finally having decided upon one, praying for that essential ploy in bargaining to work out in favour of our finances and as would ensue after what would seem like an endless, almost futile session in haggling a ‘settlement’ that always tended to sum up as an assertion midway pertaining to both parties in buying and selling, leaving us as jubilant little folks who cannot wait to don their new favorite dress the minute they get home. And why, that’s not even all about this physically exciting and exhausting way to shop till one drops that has us still rooting for this unfurling of the activity in such version of it. As mandatory would be the stopover at the most famous eatery usually for tea and sweets and snacks but also sometimes for a lunch less full fledged and more of snackish association still but nonetheless looked forward to as something as occasional an indulgence as the act of shopping itself. In all this mix of the exuberant and the buoyant, the taxing and the draining, this physical unfurling of the universally fun reiteration of shopping makes for a curiously captivating conjuring of the charms that online shopping misses catching out on by more than just a whisker.

To believe that something often ridiculed as unnecessary splurging arising out of a tendency in obsessive almost manifestation could end up being a walk instead down the memory lane and into the deep entrenches of a nostalgia immersive in its experience of the feels. But the way in which shopping has manifested for so long before the more obvious and direct act in cybershopping took over itself explains just why the non digital experience of this activity is a very different world of realisation than the contemporary way of its doing. And it is unfolding across this realm of the variegated nature of its offering that any experience in physical shopping can never be undone of all its riches in how it is more than just an act in buying and selling of stuff, mattering far more than the material goods it has always ended up as efficiently delivering us in. 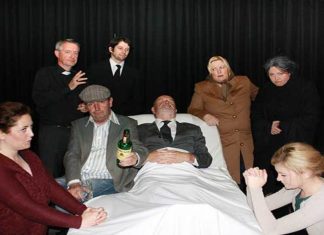