The commonplace holding of May 1st in esteem as an event in global annual prominence of largely political basis occurring under the assertion of the International Worker’s Day might be what characterises our lauding of the month as one beginning right indeed in its immense thrust on what sums up the dignity of work and labour. Synonymously referred to also as May Day in carrying forward further this belief in work across its ethics and in its virtues, this whole notion of May 1st being integrally associated with the celebration of Labour Day the world over might be what endows upon this month an essence revered in itself. But even beyond this distinction in utter prominence- in fact preceding this certain worth of immense influence- the 1st day of May also harbours a glory alluding to its existence still as very much a spring time event. Reminiscent therefore of the fun and frolic that spring endows upon life through a generous derivation from nature’s exuberant bounty particularly availed out of this prettiest of the world’s seasons and evoking emotions in joy and happiness both in the springtime spirit as well as in the color and celebrations more traditionally marking this different experience of the May Day is every repetition of May 1 on the almanac shaping up as an event far removed from the assumed sobriety of the more general awareness of what marks this particular day as one recognised in its exalting of the essence of work.

In its springing upon a premise sprawling across the fag end days of a season followed by the onset of summer, the traditional May Day observance is one marking in fact the first day for the heat and sun to take over the vibrant yet somehow subtler charm of springtime. Celebrated usually on May 1st but also occurring in some parts of the world on the first Monday of the month is this very European holiday of fun and festivities galore that is no less ancient a tradition than any other such traditional observance that the world continues to pursue in all heralding of their significance in continuity. Dating back to times of the Roman Republic embedded in the Before Christ era and unfurling in fact through the trails of the celebration of another festival observed as Floralia, festival of Flora is this folkloric frolicing to ‘bring in the May’ though in a manner quite different from what had characterised its grounds of origin. That is only obvious though since May Day stems also from a host of other associated May time observances, be it deriving from the month long Maiuma festival of the 2nd century AD or in adhering to that ushering in of the summer spirit that found expression also along the Germanic celebration of Walpurgis Night since the 10th century and a number of similar such events and affairs that all necessarily commenced with the setting in of this month of the summery vibes acting upon the still palpable spring sentiment to create a vibe in such fancy that accounts indeed for a slew of such celebrations to follow all through.

The rooting in times of the past might be what helps this cause in traditional trumping over the elements of the modern day political and social affiliations encapsulating the essence of May Day in more familiar times but the customs and conventions of what mark the present day celebrations are expressions stemming from a more recent history. It has been particularly since the 18th century that the May Day celebrations took upon that assertion in more delight and less religious prominence, unfolding through such unique elements of its carousing that are alluring indeed in all of their associated romance so evoking of its nature as a festival serenading the many spells of spring. With such occurrences in utter delight of dancing around the maypole or the crowning of the Queen of May or the prettier even pursuit of prepping and gifting those joyous May baskets characterising this festive day in May beginnings, this journey halfway through summer in very precise interpretation of its being as the exact midpoint in between the spring equinox and the summer solstice makes for an engrossing celebration indeed in all the merry fun and excitement of it.

The maypole tradition might not be exclusive to the May Day merrymaking even when the very name of it does invoke that notion in particularity but it is integral indeed to the entire May 1 resplendence in rejoicing the rejuvenation ushered in by spring followed poetically enough by the lively gait of summer. And thus it ensues, this dancing around those wooden poles of continuing significance and heightened esteem even as derived essences of this long held tradition stem out in shorter assertions as well through the garlanding tradition conforming to the English expanse over the European. In both forms of cultural expression though, the lively hues of what sum up the springs and summers of existence define this certain dimension in revelry as well. Wrapped with colorful ribbons would be this prominent element of many an European folk festivals around which revelers would dance and make merry as part of a tradition rather wholesome both in its entailing out of a continuing legacy as well as in its modern essence in being a rite of spring so evocative of the joys of this blessed existence of nature. In its more concise interpretation in as particular terms alluding instead to the celebratory chartings meant for children, the garlanding tradition of carrying those decorated ‘maypole sticks’ would present visions in rather flutter. With attached hoops or cross sticks or swags and adorned with flowers and/ or foliage or even with artificial modes of decor like those created out of crepe paper, these definitely festive assertions make for a May day delight modern indeed but still rooted very much in the swaying symphony occurring across the meaningful meandering of traditions.

Of springtime resonance and therefore unfurling essentially as a celebration of fertility, the May Day festivities would also occur in such rituals of gathering the beauties of nature, as in the decorating with wildflowers and green twigs of trees as well as weaving of floral hair wreaths as well as very amusing customs indeed of even crowning a May King or Queen. In fact so essential is this whole crowning idea to the entire May Day narrative that the May Queen today stands as a personification of the festivities though catering to the English realm of celebration much like the garlanding tradition itself. And while the May Queen testifies indeed most prominently the whole notion of this observance of 1st May as one drawing upon the essence of fertility and thereby of femininity, the corresponding male figurine also tends to be a fairly visible presence along the English pursuing of this occasion. Whether he be identifying as Father May, King of the May, May King, Garland King, Green Man, or Jack in the Green, this consort of the May Queen would also take upon himself that assertion of springtime and fertility in his very evident depiction in the garbs of the green to establish himself also as a definite May Day persona.

But the most charming tradition of this entire revelling in the spirit of the magnificent march of May has to be the hanging of prettily decorated flower baskets upon the doors of houses not though by the owners themselves but rather in their receival as expressions of love. Small, decked up baskets of floral prettiness and festive sweets would rear their delicate heads every May 1st from upon the doors of one and all, hung there by loving and anonymous friends, lovers or neighbours as part of a really delightful custom that saw tremendous popularity during the 19th and 20th centuries. Simple but necessarily pretty paper baskets often made into the shape of a cone, and filled with the springtime treasures specifically availed out of the bounty ushered in by the late April showers and also accompanied by the exciting elements of gifts and treats, these lovely hangings by the door would be such signifiers of heartiness that would indeed endear to all. As a means of welcoming the world into the warm, hopeful days after a tough winter spell and in a way as entertaining as well that saw the presenter hang it upon the door of those they love in whatever reiteration of that forever rosy feeling and run right away after ringing the bell, the may baskets made for such a unique celebration that only furthered the appeal of the festivities. And making even more special this tradition in all things quaintly charming would be its definite intertwining in the strings of love, this time of purely romantic musings as the hanging of the May Day basket would amount to a definite expression of that emotion in universal enticement to the recipient of it. The excitement continued in such adages that required the woman to chase down the man if she ever managed to spy upon him in an effort to steal a kiss from that fellow perhaps reddening by then under the overwhelming effect of all that eventful experience to follow! But while the kiss from their beloved would be the perfect May Day gift indeed for the man hopelessly in love, the very prospect of being caught would amount to disgrace enough to let them instead have squandering their chance at those feels of a romance. Equally offsetting a prospect would be if the basket hanger happened to be a lady instead, discouraging this time the male receiver from pursuing her ever! With such curiosities amping up indeed this peculiar custom of a time nestled in the comforting confines of a blessed realisation of a definite spring and a summer about to dawn its glorious light, these May Day baskets made certainly for carriers of charms galore in all assertions of them. And so did the very occurrence of May Day as well, that which in celebrating such sparks of spring and lauding similarly a spirit of summer brought upon the world an alluring assertion of beauty and glory too worthy to do away with even in the face of the perhaps more consequential identity of it as what entails out of its parallel and more popular prevalence in being the International Day of Labour. 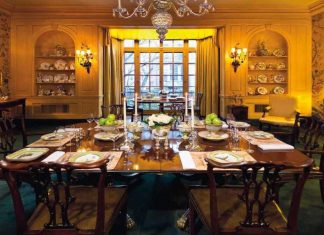 Dashes across the dinner desk 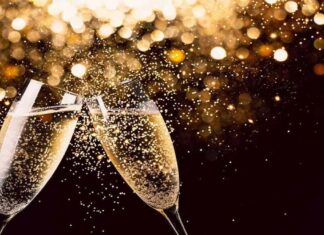 Telling through the tradition of the New Year’s toast