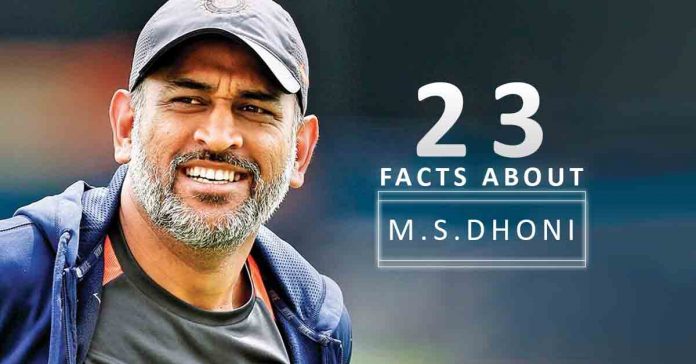 He might be one of the most raved about of cricketers in the world but that does not make Mahendra Singh Dhoni any less of an enigma. Witty and cool, loved and adored, Dhoni is very much the man you know. But Dhoni still dazzles in his penchant for the unknown. From introducing a trademark shot in the sport to making the DRS his own, Dhoni has a knack for blowing our minds off. Here are 23 cool MS Dhoni facts for fans forever willing to know about Captain Cool just a bit more-

MS Dhoni is known for his trademark Helicopter Shot that has made the climax of many of his match winning knocks all the more special. But you would be surprise to know that Dhoni can not really claim patent over the particular shot. The Helicopter had indeed been taught to Dhoni by his friend Santosh Lal in a tennis ball tournament.

Dhoni’s childhood passion for football and his goal keeping abilities are known to and applauded by all. What remains a lesser known detail among the MS Dhoni facts is that Dhoni had been equally proficient in badminton and had also played the sport at the district and club level.

However, it isn’t also only football and badminton that incite sporting interest in Dhoni, apart from cricket. The Mr. Cool of Indian cricket is apparently a huge fan of wrestling. A total WWE buff, Bret Hart and Hulk Hogan are his favorite among wrestlers.

Dhoni has continuously manifested his position as being one of the top earning cricketers of the world. But that isn’t the only of MS Dhoni facts that establishes his worth as a priceless cricketer. Dhoni is not only the most sponsored athlete in India but also have the second highest endorsements among Indian celebrities, second only to Bollywood superstar Shahrukh Khan.

It however isn’t without any reason that Dhoni commands such massive paychecks and sponsorships. His stature as one of the most competent cricketers in the world does much to enhance his value and net worth. The only player ever in history to win the ICC Player of the Year twice in his career, Dhoni’s success as a cricketer sure translates off field as well.

Dhoni also holds the record of being the only captain ever in world cricket to claim each of the three ICC trophies – the 2007 World T20, 2011 World Cup and 2013 Champions Trophy.

His staggering income and multiple income sources also has ensured that Mahendra Singh Dhoni remains the highest individual income tax-payer in Jharkhand for more than half a decade apart from being one of the highest tax payers in India.

Pic taken after the ceremony, the smile says it all.thanks to all the instructors at PTS Agra

A responsible citizen of India, Dhoni’s love for his country manifests also in his many ventures that have led him being associated actively with the Indian army. An honorary Lt Colonel since 2011, Dhoni also discharged duties in that rank with the Indian Army in person after the 2019 World Cup.

MS Dhoni never sports the tricolor on his helmet even when other Indian cricketers freely do so. That is also something which stems from his respect for country. Because he switches from cap to helmet while wicket keeping, the helmet needs to be put on ground. This is something which amounts to disrespecting the tricolor as propagated by our constitution. Dhoni would rather not sport the tricolor at all than putting it down.

Dhoni also famously once told his wife Sakshi that his love for country precedes her and she is only his third priority after country and parents. Dhoni even skipped the birth of daughter Ziva to shoulder responsibility of the national team prior to the 2015 World Cup.

One very interesting among notable MS Dhoni facts is that while he might have been the most successful skipper for India, he also holds the dubious record for the Indian captain with most Test losses overseas! The irony that the game of cricket can be!

You might not have heard him humming but Dhoni has really refined taste in music, particularly delighting in classic Indian numbers. A Kishore Kumar fan, Dhoni seeks melody in the maestro’s evergreen Bollywood hits.

Just like his taste in music, MS Dhoni also keeps his choices in food simple and desi but delectable. The cricketer is very fond of biryani and chicken and also delights in digging into his favorite dessert, a sinful treat of hot chocolate fudge.

In fact Dhoni relishes the bliss of simple home cooked meals so much that his wife Sakshi carries an electrical cooker to cook food for Dhoni every time she accompanies him!

With his religious nature, it might be that Dhoni derives all his calmness from spirituality. He loves visiting temples and can be frequently seen paying his obeisance at every place of worship he manages to visit.

This norton is almost ready for me,thanks to my friend

Dhoni’s passion for motorcycles is at least as famous as his cricketing exploits and calm composure. He takes pride in his remarkable collection of two wheelers that includes everything from a Yamaha to a Harley Davidson, from a Ducati to the Kawasaki. Dhoni is also the only one in entire South east Asia who owns the super exclusive Confederate Hellcat X132. Now that’s what we call playing it cool!

While Dhoni came to be known as Captain Cool only after he exhibited his trademark calm demeanour even while carrying out rigorously the duties of captaincy, he had forever harboured the look that made him the cool guy.

In his early days when he had just made his debut, it wasn’t only Dhoni’s maverick batting style that shot him to international prominence. It was as much his unconventional look- his long hair to be precise- that also caught the world’s fancy! In fact, those shoulder length locks became very much an identity for Dhoni in his initial years.

However, much like his Helicopter Shot, even Dhoni’s long locks were more inspired than created. An ardent fan of Bollywood actor John Abraham, Dhoni had his hairstyle modelled on the handsome hunk and even chopped them off when John decided to give them up.

Dhoni’s not so dreadful deadlocks though found unlikely fans. Former Pakistani Prime Minister Pervez Musharraf was a great admirer of the hairstyle when Dhoni debuted it.

Dhoni is happily married to Sakshi Singh Rawat who he wedded just a day after his engagement! MS Dhoni sure manages to keep thing intriguing for his fans!

While the love story of Dhoni and Sakshi is portrayed as one that celebrates childhood love, in reality love found way in their lives much later. Dhoni and Sakshi did know each other since childhood since their fathers were employed in the same organisation. But Sakshi was indeed junior to Dhoni by eight years and studied in the same school as him.

You have always seen MS Dhoni as a man of calm demeanour, rarely giving way to frenzied celebrations and explicit display of emotions and excitement. But the much loved man is known for his banter with team mates and his goofy side is as adorable as his composed person.

Had no clue I make crackers also,hope it’s good.happy Diwali

In fact, the cricketer did manage to stun with his hatke avatar in some of the most remarkable of his ads and commercials.

While it is well known how significant the number 7 is for Dhoni, it is not as well documented as to how his cars also bear the same lucky number! From his date of birth to his jersey number, his lucky diamond studded pendant to his Hummer, 7 is such a vital figure for Dhoni.