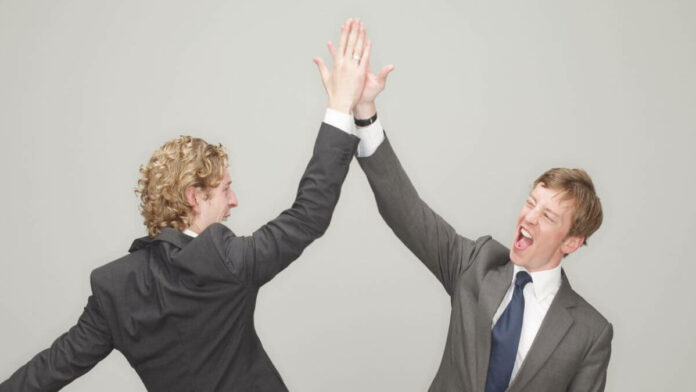 That enduring spirit of celebration or an excited residing in companionship, the perky clap of the fingers is one very evident display in either- and possibly even so much more. Encompassing also the congratulatory delivery in celebrating as well as the gay bonding in cherishing is the definite strike of two individual hands occurring as what we call a high five. A gesture so widely invoking of expressions galore, in as wide an entertaining of it in being indeed a conveyance of emotions in global terms, this particularly popular practice is derived in fact from a precedent something that might be soundingly occurring as an exact opposite of it but is actually quite the same in being what it is.

To come to know that even the high five has a history makes for some interesting bit of trivia. For who on earth would have assumed that this greater gesture of considerable commonplaceness and in as much collective commonness as well would be charting through its course such esteem that frankly speaking do not quite entail so much from even its origins? Not to brush aside for sure the fairly known instance that triggered this fad of considerable longevity but take into account the ambiguity that still prevails even when finally allowing for a more conclusive incident to gain greater weight and the high five perhaps is more enjoyed in its own than it is explored in history. But essences do not cease to characterise definite events and entities and elements just because one wouldn’t be particularly aware of them. And so there prevails through the all pervasive prominence of the high five a lineage in history that even further emphasises the identity of it being a classic play enduring still the test of even the social distancing times.

Robbing the high five of its ingenuity seems like quite a crime to commit, given the ‘heights’ to which it have extended in popularity through the years of it coming to be. But this much spirited form of acknowledgment, whether in presence or in essence is one stemming out of the ‘low- five’. Personally having never occurred as something to be such a distinct entity of its own, even when being more than well versed with the physical occurring of it, it came as quite a surprise that our much enthusiastic cheering upon the high five is based on this lower rung on the ladder. A follow up on the 1920s symbol of greater significance, this ruling fad of the 1970s and ever since tends to be at once a more relaxed even when representative still gesture in alluding that which perhaps explain its ability to sustain even in the face of greater threat accruing to all things essentially physical in some way or the other at this unforeseen point of time in human history.

When exactly this ‘upgrade’ manifested in all physicality of the hand slaps is not a case in much certainty. But the popular iteration of the earlier mode in low fiving leaping to find expression high up there can be well traced to a sporting account in the year of 1977. Unfurling upon a field of baseball play between the legendary Dusty Baker and the trailblazing Glenn Burke as a celebration of the former’s home run for the Los Angeles Dodgers leading the team to achieve the unprecedented feat of having four hitters with at least 30 home runs each in a single season, the high five though would not come to acquire its distinctive name at least until the dawn of the next decade. And while that might not have been a very long gap of time between the ‘christening’ of the now ubiquitous gesture and its already prevalent practice, this period in etymological gestation still would be significant enough to let other claimants of this ‘feat’ stand a chance in furthering their case in considerable conviction.

The most notable of such contention aimed at establishing the exact origins of the high five arises from out of a certain practice basketball session. Dating back to the 1978- 79 season to therefore closely follow on the heels of the other famous assertion had been this occurring between the University of Louisville Cardinals’ Derek Smith and Willy Brown initiated by the latter as a commonplace low five but elevated indeed to the next level by his more illustrious compatriot. In fact rather interesting happens to be this particular account of the high five’s genesis, playing as it does upon the quintessential basketballing requirement in jumping high. But despite such entertaining possibilities providing the premise for the high five to make its debut, the claims of it existing since at least a decade earlier continues also to be quite regarded an aspect of its defining.

The earliest dating of the high fiving gesture thus concerns the period of the 1960s, within America’s women volleyball circuit but with no definite detailing available to drive such notions to popularity, it is instead the 1970s assertion that prevails largely. Whatever the timing of its being though, one thing is certain that the high five has been a predominantly sporty thing and one that continues therefore to be much frequently engaged in across the course of plays not just limited to baseball or basketball or volleyball though. As a reference much common thus in many arenas of sport but not limited as well to just that area of governing, the high five today stands upon a pedestal forever celebrating of the wins and successes and joys of life across all its aspects.

Cutting across this characteristic trait of games and sports and plays that the high five incorporates within itself happens to be a more revealing story of its coming into existence. In some literary depictions for instance, the telling account of a high five had already been prevalent but without the articulation of its ‘name’, it only is obvious that recognition would not dawn upon this evolved coming together of hands. Consider also such evolution essentially summing up the other end of the spectrum with derivations worked upon the high five after it found clearer basis and there sure isn’t any exclusivity that the realm of the sports commands for itself as regard this phenomenon.

That there are different types of high fives comes across as no less surprising itself. Particularly since much like our partaking of the enthusiasm that the now classic hand gesture necessarily encompasses as part of it nature happens to be one quite removed from any knowledge about the basis of it, so too our carrying out of the other modes in high fiving is as common an occurrence in their action, bereft only of the literal alluding to them. And what’s interesting across these varying assertions of the high five that essentially should be a two people undertaking is some versions of it that betray this whole essence of acknowledgement itself as being the core component of the high five connotation.

Emerging therefore first as the case in such interpretation is what would not even strike as being a high five in the fact of its precise non naming- and also non existing. Much embarrassing instead is this faceless- er handless facade of what is as enthusiastic an initiation of a high five as possible but that which fails to find any takers for it. Without any reciprocal hand thus to complete the action, the by then slipping into a poor awareness of self in some humiliation beholder of the raised hand takes instead the dubious distinction in being ‘left hanging’. Interpreted largely as a mild form of insult or one of those ‘no offence’ jokes, it though is yet again a testament to the high five’s inclination to surprise that this version in non committal handedness might even be intended as some sort of enlightenment as well.

This might sound like quite an ‘intimidation’ to never opt for a high five at all. But with the self high five manifesting as the option in saving grace and face, it’s worth raising the hand indeed. Quite evident is the self high five in being exactly what it professes, relying wholly upon one’s own person and taking full advantage thus of the privilege of humans being two handed creatures to return one’s high five with another of their very own!

The self high five serves quite the purpose in doing what it preaches, but there is also an added benefit to it- of being in and by itself a physical gesture that adheres still to the social distancing norms. It though isn’t the only way out that the high five has managed to eke for itself in continuing to be cool without flouting the norms. Case in point the air five or the more amusing wi five that lives indeed in the very vibe of the classic high five without any form of physical contact. The physicality manifests only in the extent of depicting the action- quite a catch also when one needs to relay indeed their excitement only and only through the energy of high fiving that particular hand but unable to tackle the barrier of distance.

That the mere imitation of the gesture entails a realisation surprisingly close to what a realer occurring of it dawns speaks only further of the versatility that has led the high five to be a something so universally and essentially and perhaps even instinctively taken to. Asserting as even more quirky a form of the high five in its wi- five reference punning upon the technologically wireless identity of the wi fi is this specific type reinstating yet again the capturing essence of this multifarious mode in celebrating and congratulating and greeting and acknowledging so readily with the fives.

For all its evolving in inventiveness and eccentricities though, the high five continues to be acknowledging in itself of its stemming upon the lower fiving platform. That is an idea adhered to in the more elaborate play of the ‘too slow’ kind that spans out as a sequence of an ‘up high’ and a ‘down low’ with also an accompanying rhyme for a much entertaining, playful rather assertion of the ‘historic’ essences of both. Quite evidently then, dealing with the highs and lows of life by deploying the dynamic plays of the hand sure cannot get any more exciting- and psychologically rewarding as well. Gimme a five, will you?