That’s the premise of disillusionment indeed- of being strikingly real and perhaps repulsively as well. And that explains therefore just why so greatly we tend to experience the disappointment of the delusional in such dramatic degrees of its dawning upon us. Encountered along a wide range of the many thoughts and notions and acts and beliefs of what sums up the dynamic fore of human nature, disillusion is never ‘easy’ a reality to accept which is why the many of us not any rarely aware of this state of things more than frequently prevailing tends to have such extreme reactions to it.

One very classic or typical experience of this not desired state of delusional disillusionment though happens to take a form more fascinating, or rather perplexing perhaps. Exhibited of course as symptom of a psychological assertion in the let down dooms of what seeks to balance the booms of life is a certain occurrence peculiarly concerning a very universal expectation, not though met everytime and everywhere with the same reception in immense disappointment.

What we are referring to here is not though an isolated case or even a phenomenon in uniqueness. In fact as a characterisation pertaining to a wider category of occurrences commonly outlined as psychosis but manifesting still in a definite subset within that larger classification, that too interestingly clubbed somewhat with a couple related but not essentially similar experiences in not always disillusioning burst of the bubble as well is this remarkable revelation not exactly very revealing a reality either at least in that its knowing has been relatively explored since times not really recent. Curious in its sounding as the Paris syndrome and that which entails the likes of other similarly evoking citings of the related but instead ‘illusional somewhat’ Stendhal syndrome and a differently assertive but akin awareness of the Jerusalem syndrome, this set specimen in tumbling down of sky high expectations amounts to an overrealistic realisation in despondency that stands impeccably true to the striking rendition of what the real vs reel analogy surmises.

The Paris syndrome might be the most recent of such understandings amongst this trio of intriguing unfurling but it still happens to be the one most commonly understood and referenced in popular culture as well as in realer accounts. That is only given perhaps considering the exaggerated appeal that the global city of love nestled in one of the world’s most romantic countries France. But ironically, it is this same set image in immense charm both in its love filled vibe and the aesthetics of its tremendous beauty that what has made Paris the core of its unpopular namesake phenomenon.

So exalted in its identity in fact has been this one of the world’s most visited cities that finds expression in its oft stated reference as one of the capital cities of the world. Be it in its most prominent realm of fashion and style, and as exemplary experiences of the culinary and the romantic alike, as well as even in other spheres of what matters say finance and diplomacy and commerce or even the revolutionary conventions of science and certainly the soulful appeal of the arts, Paris has always been a travel destination par excellence. Sadly then, or rather quite despondently indeed, the undoing of its such glorious receival in the global arena as something as off- putting as the Paris syndrome makes for a dive into the very depths of damning disappointment itself.

This occurrence of the syndrome de Paris, to be as true as possible to the exclusive French origin of this phenomenon, is the definite dawning of disappointment as overwhelming as could be, emerging out of an appalling disbelief in underwhelming a discovery of the real expanse of this haven regarded popularly in all the rosies of reality. As a striking paradigm shift of sorts comes to reveal in this mismatched experience of expectation vs reality on first hand witnessing of its much anticipated grandeur, first time tourists to this travel destination of all repute struggle to come to terms with the ordinary almost prevalence of this place so presented as a flurry of all things fancy. Not to say that Paris isn’t fancy enough for real but the standards to which it has been regularly elevated in popular culture might occur as a tad bit too fantasised for some folks forever coveting the greater European dream as if it were indeed some real life fairytale waiting to unfold in all the magic expected out of it.

As an alluding to the broader concept of culture shock, the Paris syndrome should not be too out of place a reality check dawning in considerable intensity upon many an imaginatively star stuck wanderlusting soul the world is teeming in. With a host of symptoms coming to characterise this highly disappointing account of the French fascination ranging from emotional and psychological feels of delusion and derealization or even hallucinations and anxiety to physical assertions of dizziness and sweating and aggravated heart rates to name a few, the Paris syndrome however gets as real as it can when it comes to emphasising its massively relevant context in the considerably swashbuckling world.

This coming to characterise by more than general a sense of disappointment on actual encounter of the much touted Paris charm that might not reveal as being exactly worth it to some might be a phenomenon one would believe to be very much global a manifestation even when it safely classifies as sufficiently rare indeed. But what makes for another surprising discovery along this same trail of the shocking is the basis of its emergence and larger prevalence.

Quite considerable in its coming to ‘afflict’ people from Japan particularly harbouring too high some hopes from a Paris permanently etched on the high rungs of luxury is this symptomatic shattering of dreams and visions and aspirations alike that though is likely also to project its might upon the many a other east Asian identities. Somewhat understandable though is this peculiarity governing this part of the world that has since nurtured a flamboyant image of the western world, particularly when it comes to the lofty idealism of Europe and its constituent elements of exquisite fame- and not to forget of course their courting of the eternal essence in romance.

As a concept substantiated by the definite existence of it, the term Paris syndrome was coined in the 1980s by Japanese psychiatrist Hiraoki Ota. Beyond this though, the specific space and time of emergence of this condition is not so much characterised by the facts. A significant such cases of this particular character has since been documented and studied validating very much the reality of this experience perhaps occurring as somewhat bizarre in the first instance of its mention.

Interestingly, the associated awareness pareil to this revelation in contexts of an exclusively French fame and one that is even far drawn a concept in history, popularised as the Stendhal syndrome or the Florence syndrome tends to be almost opposing of this view in nonremarkability. An eponym of the 19th century French author who first reported at least this no less universal experience in being taken aback upon witnessing the veritable magnificence of the Basilica of Santa Croce in the Italian region of Florence, this 1817 narrative was what shaped up the subsequent ‘identification’ of this syndrome somewhat more readily unfurling in encounters dating to times of the 19th century.

The definite term though came to stick years later only in 1979 and began covering a wider range of emotional experiences induced by overwhelmingly real encounters with fittingly extolled specimens of art and architecture or otherwise of objects of great beauty and phenomena of distinguished antiquity. What however makes the Stendhal syndrome also intriguing is such cases of its reporting that dwelled on not just profound emotions stemming from the understandably awestruck sensibilities of the sight. Instead it also can be other traits of psychosis that can come to exert their influence upon these ‘victims’ unsettled indeed by too much grevity of what they were partaking of in person that makes this syndrome another peculiar case in and of psychology.

Asserting as paranoia in some cases or experienced as palpitations in others even as more extreme realisations of alienation or loss of identity tend also to be common attributes, this particularly Florentine entity has over the years sure done much to uphold in aggravated significance the unique reputation of that particular region of Italy. That sure is reason to delight for the reputed anyway reverence accorded to many an elements of definite Florence links which however has been the exact case but in reverse eroding the prestige of the poor(?!) city of France.

Coming to consider the intermediate condition christened the Jerusalem syndrome and the nature of it reveals as somewhat different than that of what we have already discussed. More a stemming upon religious grounds but similar still to the Paris and the Florence syndrome in its definite occurrence as well within of course the extent of the city of Jerusalem. But even in the very religious basis of it, it still is diverse enough in its not specific pertaining to a singular sect or religion but manifesting as psychotic enough an experience for many who set foot upon this one of the oldest and most holiest of cities in the world.

First described in the 1930s but with references of it well rooted in the years of the 1800s, the Jerusalem syndrome happens to be more widely explored in what concerns the further and rather detailed presentation of it. Its rather prominent establishing as a case in religious psychosis does not however make it really different from its associated counterparts, entailed as it is too out of a range of psychological nuances treading the trails of the travel.

This narrative from East Asia that joins in on the bandwagon of the other two classifications eked out of the enamoring European expanse albeit across a different spectrum of assertion though has managed to find for itself a counterpart from the southern part of the continent. Permeating the aura of the Indian subcontinent or even more definitely the nation of India indeed in particular is the newfound disappointment availed out of a countering the expected Indian way of life. Manifesting thus in another added dimension of this already deranged world of unrestricted boundaries is the newest unfurling of the Indian syndrome that accounts though for another whole thread of discussion altogether.

So whether it be Paris or Florence in consideration of the apparent aesthetics of their appeal or the individual idiosyncrasies innately stemming from the diverse essence each of Jerusalem and India and widening perhaps a scope of its spread in the near future, it still is in this common element of binding characterising distinct terrains of traversing that projects perhaps the world in the increasingly appropriate image of it being a shrunken global village. At least that intends to be the psychology driving this notion in connectedness, encountered in all universally resonant and relevant experiences of popular perception, or even in less popular understandings of them. 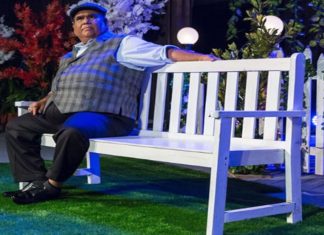 Exploring the spectrum of Satish Kaushik beyond strokes of humor and...