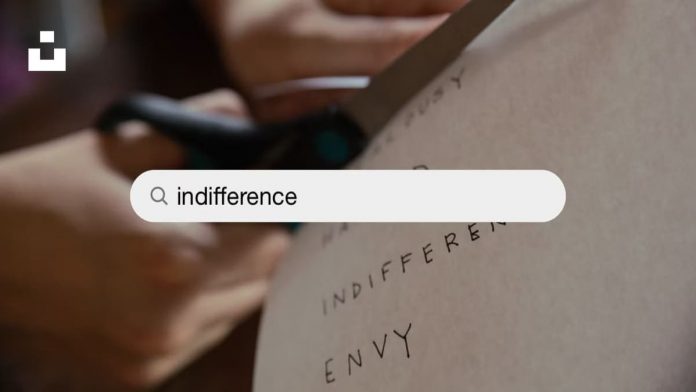 The opposite of love might be famously ‘lauded’ as indifference but this one certain entity of the emotional (perhaps) isn’t so straightforward an assertion to identify in as precise terms as being antonym to something. Perceived though still in that singular line of understanding uncharacteristic of such things and attributes appearing as desirable, this notion in indifference perhaps is what makes all the difference when it comes to understanding this weirdly intricate realm of residing, ‘convulsive’ as it is in the mere evoking of this idea in interpretation. It might be in its commonplace view held to be dwelling on the opposite end of the spectrum of something as positive, as desired, as needed as love that has made indifference to manifest as almost a vice. That, despite the fact that indifference is not as intense an awareness as love nor as consuming a force as its competing fore of hate and yet it is seen as more repulsive even in its very assertion of rather undramatic nature. For indifference is anything but passionate and should therefore make sense to be better elucidated in such terms that do not at least undermine its essence, let alone exalt it profusely. But that is a reality not to be, and so is the perception of the indifferent state of existence in a surprisingly repulsive notion, despite its treading of an ‘unrousing’ ground that inclines towards neither the good nor the bad.

Indifference is a narrow escape from the overwhelming awareness of overstimulation, something that so drowns us in its excitement in perceiving that we fail to see the draining inroads we are allowing such stimuli to make to our soul. And it is this evocation of the indifferent feels in wanting to avoid this reality in triggered existence that makes it unappealing a course of emotional action to take recourse to. And yet, it is not so easy to cultivate indifference either, despite it all being such a simple way out of the compelling conundrum of events that greet us along every route of life. Playing it safe might be what indifference equates to in the abstract scheme of residing, emerging therefore as some manifestation of being a mechanism in coping with the vast universe of what inundates us in all gripping profusion of the narrative pertaining to the good and the bad alike. But within its rather stoic facade of the non existent, indifference harbours within a power that is as assertive in its potency as that emergent from just about any other exploration of the emotional. Specifically when it are such matters beyond our control and outside the scope of our understanding, it is the neutral trail of the indifferent attitude embarking upon which seems to be the appropriate way through.

Even when indifference isn’t any experience in the most intense inklings of what we feel all through, it still isn’t exactly subtle either. It instead is in a deep sense of self control and a surprising coming forth of confidence as well that indifference arises as an alternative worth scouting in all its alluding to the attributes of the desired this time, as being the emotional way forward in a calm and composed mannerism of whatever it is characterising this doctrine in detachment. Whether it be a route in continuity or one taken to in selective yielding of its might in an almost liberating essence, indifference can transpire as an interesting turn indeed in the everyday scheme of things and happenings threatening to overrule the very basis of our being with their all absorbing actuality.

Indifference adheres to the controlled scheme of things but not in a manner coercive though. It rather is a realisation in the regulated mechanism across which life spans, as a balanced assessing of life matters in all reason such that one is neither too buoyant nor too depressed at the prevailing state of affairs. This lending in not wholehearted dimension might make indifference more classifying of such terms dreaded almost as nonhuman, robbing therefore one of the very essence of their existence. And that might be what makes indifference a course of action sparingly charted out, if at all it is along some dimension of its understanding, but it also is this refusal to submit to the exerting forces of life and living that indifference ekes out for itself that X factor beneficial at least to some extent for its deployer, even when not so much, or rather at all in the larger awareness of it.

Liberating for sure in its musings in perceived nothingness, but also stirring still in this notion in non mattering difference as being diverse from the typical understanding of entirely human entailing, indifference is more dynamic an illustration that what we assign to its idea in devising. Which is why indifference can indeed be not as bad as what the more commonplace understanding of it deems it as. For even in its potential nothingness in characterisation of the emotional ambit, indifference can still be unfurling across more than one facet of a singular premise set in some ambiguity. This means indeed that there exists such trails of the indifferent identity that converge only after treading first their own expanse in exclusivity. Indifference sure can mean being immune to the experience of others, whether that be one concerning their personal realisation of a not so conducive state of existence or even in regard to being your reception to a response availed out of them. But it can also mean responding to some particularly debilitating reality in occurrence with such dignity that stems from an absolute control over the mind otherwise wired to instinctively react in the same tone of assertion as what happens to be the nature of the happening. And it is in pertaining to this resolute potential that the human mind harbours all along albeit in a more dormant awareness of it that indifference comes to encompass that power of superiority. Expressing through a tone of voice unusually resolute in its belief upon restraining the volatile emotions of the self or portrayed through such acts and actions in sometimes disguised, sometimes as true as can be coming across of them as translation of the emotions, indifference assumes an ambivalence so resounding in its gravity that makes it in fact more intense and more complicated a state of existence to further one’s perspective along.

To counter therefore the general worldview in such disregard for indifference, as being unworthy enough to rather shrug it off as a mode of existence even when it might account to and of very natural basis would be such pitching for this mode of feeling that makes it come across as somewhat attractive in fact. And no its isn’t just the supposed factor of the ‘cool’ quotient that comes to play here from where stems the perpetual negativity governing this occurrence in mannerism of being attuned to toxic explorations. It instead is the allure of a conviction so ingrained in this notion of being aware to the core of one’s own innate self that makes indifference manifest as a succour of sorts in veritable steadfastness. Despite its undoing in such traits of humanly correspondence as the ones catering otherwise to the desirable fore of being sensitive and emotional, the very attitude of indifference resides in a realisation tremendously anthemic. Indifference is not only and always proceeding to ignore such facets of life that should ideally command attention and evoke response out of a humankind taking pride in its emotional as well as logical superiority. Indifference instead is as real an experience as any other and is therefore as prone to being justifiable- or unjustifiable as well- as virtually every other emotion experienced. In not allowing external factors to unduly impact one’s existence, which ultimately is the highest level of awareness one can come to attain within all their human limitations, indifference presents unto one a case in such power that elicits out of them the highest regard for their own selves. Whether that be in not being excessively affected by whatever is directed towards them or not feeling it necessary as well to validate their stance even in the face of rampant judging by one and all, indifference for sure is tempting- a view held by none other than the man who made this case in particularity stand out as being the stark opposite of the love feels. But while his context of understanding sought to be elucidated in this manner of expression is different, drawing as he does from a personal account of his surviving of the Holocaust, it also holds relevance still for the alternative reality of what indifference can be in its parallel interpretation. To argue whether an indifferent state of existence should be looked down upon or not should not even constitute part of the discussion. It instead should be an attempt to align with each of the essential marks through which indifference builds up on its meandering along the deliverance of a meaning as likely to be profound despite and outside its careless holding in perception. Sonakshi Sinha is all set to sport a new look in... Beautiful messages and quotes you can share with your siblings on...