INNFINITY
Home Limitless Flirting for each reason in every season A basic instinct and therefore occurring as something essentially ingrained in our nature as human beings, irrespective of our absolute denunciation of it in some percentage but that which turns out to adhere instead to the ‘principles’ of those vocally and actionedly emphatic advocacy of it is what flirting emerges as, as a notion in sufficient ‘stimulation’. Being a flirt might not be the most convenient of identities to deal with, even when it of course is only and at least a secondary connotation of oneself but come to dwell on the need to yield into this sometimes fun, sometimes exhausting demand in gratification of the heart and this banter in romanticism might not be so illogical after all.

Flirting might not always be as superficial as it is perceived to be in merely shallow reach of it. For it isn’t just sexual desires that define the far more amalgamative world of flirting. Flirting classifies also as a form of social behavior that avails therefore out of a range of reasons not always romantic in their inclination.

Pursuing a romantic relationship with the one you flirt with is indeed a very valid point that can find context in explanation of such behavior that inevitably comes to be a defining trait of character. But flirting is also as much about deriving fun from the experience, even when it might be a case in chasing after love per se. And it isn’t also about fun ‘just because’ that being a flirt might lead one to have. Flirting in fact can be fun a means in also offsetting the boredom or lethargy of having to do a job fervently disliked.

Which is why one should not read too much particularly into such flirting that stems out of the confining premises of the work laden office space. Specifically when it is a male human who is conveying the flirting tendency, the reasons for it are more likely to find derivation out of a dissatisfaction or even frustration with their job or position as what research has empirically established. Of course, workplace flirting can also be as ‘sincere’ as encounters of it across other expanses. But it would still do well the one flirted with to be a bit more cautious in what they tend to read through the lines coquetting of them in such settings of professional establishment.

Other associations of the flirting kind dwell upon needs more essential than the relationshipal and/ or sexual intentions and obviously far greater in importance than the entertaining potential of it. Flirting can be a tool also in boosting one’s self confidence and esteem, as well in deriving a general feel good awareness about themselves. That the flirts of the world bring upon their own in initiating the process in indulging in such very natural human behavior particularly with such people more likely to return them the ‘favor’ in validation and gratification of their person.

Flirting, however cringey it might be, still somehow endows a sense, perhaps subconsciously, of being worth the attention. And by leading themselves to bask in the luxury of such vibes, even when it is them making the first move, flirts carve out for themselves a world of general pleasure and plain happiness in all lighthearted assertion of the human instinct.

No wonder with such good natured intent residing in both its blatant and subtle approach of working, flirting is something that matters indeed for humans to engage in healthy amounts and types of it. In fact so exalted can be the essence of flirting in its characteristic goodness of a certain manifestation at least that can make it emerge as something encouraged even and in very evocative terms of reference as well. Reciprocal flirting in particular tends to be more beneficial an exercise since it reinstates many a notions of such occurring that veritably asserts such areas in which humans ultimately seek comfort in all their vulnerability as emotional beings.

Flirting perhaps is not so much about physicality as it is often perceived to be. Or at least it need not be exclusively about the body or even the heart as far as it is concerned in occurrence as a rendezvous most prominently but with also such undertones of the heartwarming and the enriching and the experiential that makes it something more ‘generous’ in its givings that what it supposedly tries to covet for itself. And quite evident is such flair of flirting in its lending upon practitioners of it such confidence that perhaps is what manifests as the charm of them the next time they venture out to conquer the world in all their skilful knowledge of wooing and wowing.

Mentally advantageous therefore in that it drives one to the realisation of a peculiar happiness spacing out the menacing spread of stress as well as holistically helpful in actually brushing up the soft skills in communicating and the like is flirting that way surpasses its viewing in dismal dismissal. And it is exactly in this strata of defining that makes flirts not so much the pests that lurk around waiting to unleash their reign of the cheesy liners and the staring and glaring ploys, presenting them instead in a more ‘evolved’ light of furthering only a prerequisite in human survival perhaps.

For it is in flirting that there resides a significance pointing to the very basis on which present day stage of human existence has come to be- upon the ploy of natural selection. In fact so intertwined is flirting with the evolutionary perspective through which the human race has furthered its progress that there even exists certain involuntary, rather instinctive displays in which the intention of flirting finds expression.

In behavioral psychology, the most prominent way in which flirting manifests its nature as an innate human leaning asserts as that classic flash of a raised eyebrow held for just a fraction of a second. Smiling and laughing follow next on the list, as does mimicking the actions of the one we are flirting with or adapting quite unconsciously their physical behavior and mannerisms even as eye contact and more bodily assertions play out to be other universal agents in which flirting finds manifestation.

Even within such characterisation though, it is not unlikely for some forms of flirting or the pursuing of it in certain ways over others to come across as inappropriate, whether wholly or to some extents. But here again, it is a matter of how one responds to the flirting technique directed to them that might be completely fine with some and unacceptably offensive for others. That however does not dim the reference through which we have attempted to restore flirting to its deserved position of essentialism.

To say that this common behavior in practice has not ever resided quite in its stature of considerable regard would not be exaggeration indeed as something largely reproached and unrecommended in stark contrast to its actuality as prescription instead for some ills, if not the panacea of them all. And yet, even with that being said, it also would be an equal understatement waiting to be pointed out that we as a whole race aren’t attuned to even fluently deciphering this universal mode of our very own behavior.

Everything from the pawns of flattery to the flamboyance of genuine complimenting can converge upon the curated cleverness of the classy good ol’ charm in flirting, making this humanisation of the concept explored by other animals as part of their established and accepted courtship ritual a far more maverick skill to pursue as an art in all understanding of the science that governs it. 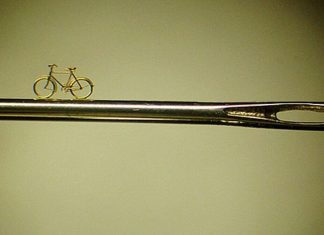 Ukraine’s marvellous museum of the miniatures