We covet them all in their exotic prettiness- either as items of decor or of fashion, as souvenirs or otherwise exquisite picks that deck up further the fancy aura of homes and manifests as an inexplicable raking up of pride in our own assertion, as we beckon another world of wonders into the fond premises of our personal space, or going even beyond such casual charting out of the allure all things unusual have on us to craft instead art and artifacts out of them. Outside the appeal they hold in their beauty, these items capable of immense interpretations attributable to them present themselves also as enticing to the pursuit by the other senses according to the human range. Whether it be their utility as tools of various functionalities or their even diverse encompassment of the essential ideals of spirituality and religion and the like, these popular picks are amassing of such significance that reveals across a wide range of dynamics asserting indeed why they happen to be just so coveted specimens of beauty and such sought after elements embedded in the human lifestyle in all universality.

Such versatility of what might be interpreted as a mere assertion upon the easily pleased dictums of the aesthetics is rarely encountered which is why perhaps this item of our fancy has had such a remarkably eked out niche existence for times immemorial. We are referring to the occurrences of the many intricately marbled swirls of treasure that dot beaches and shores the world over in all their essence and that which in their waterfront identity manages to present themselves as elusive and therefore even more desirable objects of our reckoning. We know them as seashells, and so embedded is their existence within the human realm since times past that they have also surmised themselves as being integral components of folklore. Whether it be manifesting their part in what is essentially one of the world’s most attempted of tongue twisters or lending themselves impeccably to be tied to explorations of the good life, seashells have always been a part of cultures the world over. Equally expansive is the working scheme of affairs upon which they have been made to project across the ages finding use as wind musical instruments that pertain also to the realms of religion in surprising significance at times, as tokens or currency, as tools catering to a wide variety of purposes or sometimes being the server of the purpose by their own, even as poultry feed and soul nourisher, and of course in more popular assertions of decking up your mantlepiece or the confines of your artfully decorated home, not to mention their diverse interpretation as pieces of jewelry to serve your style.

And yet, in such expansive range of their use that which contributes to the commonplace spotting of them in this world of humans essentially thriving on lands despite their stemming in and of the waters and at most its vicinity, seashells carry with them also a dark legacy of exploitation. Steeped in ugliness is the beauty of these exquisite specimens of nature, forcefully drawn into the selfish world of our own exclusive concerns through their trading in such means that are illegal and yield consequences of utmost devastation. And even without indulging in the process of their buying and selling and instead picking them up, most harmlessly as you would believe from the very beach itself, across which they span out in hundreds and thousands as glistening designs of gorgeousness, you would be as actively engaged in the destruction of what constitutes an entire ecosystem. It indeed is surprising that seashells happen to be so common elements of our everyday life in their many affordings that the unethical, rather cruel nature of their acquiring does not even present as a possibility, let alone the reality of what is a freely practised hobby of sorts continuing since long, extending perhaps to such times that are as old as the beginnings of human history.

Behind the guise of the glitter of beauty emanating from the almost surreal looking visage of seashells is a practice ingrained in barbaric cruelty, so characteristic of the ‘civilised’ human race. And seashells that find their way into our homes and lives undergoes a journey not as simple as picking them up from the beach, even when that entails as well to equally disruptive a process of the ecological balance. But the harvesting of seashells specifically for the purpose of their commercial sale is even more deep seated upon the premises of cruelty because they are prepared for the market when there still exists a living being within them. An illegal trade therefore in its very basis, that essentially involves killing of an animal in such measures that are chilling to the core, organised seashell hunting and subsequent harvesting amounts to rampant exploitation of marine life. Collected in such massive amounts that potentially empty entire ocean floor, these sparkling and indeed very alive shells are then subjected to processes as brutal as sun drying and oil or even acid dunking before being scraped of all traces of life to endow them a sheen which is what makes them the objects of desire that they are. Widely prevalent in many countries of the world including India, the Philippines, Indonesia, Latin America, and the Caribbean are such practices of unethical and exploitative measures even when there exists, though only on paper rules and regulation to protect a wide range of sea species from meeting such fate.

But even when we choose to overlook, in the classically ironic ‘humanitarian’ fashion the appalling nature of what amounts indeed to mass killing of helpless living beings that we deem as being lesser lives than us, there is no escaping the reality of the harm that we are bestowing on the environment. By ‘plucking’ just a single seashell from even those stretches of sand so abundant in them that they have come to be known as Shell Beaches, we are doing irreparable damage to the delicate ecosystem of the ocean. The impact of such destruction of course is magnified by several extents when these shells are extracted in thousands by commercial divers from the ocean bed. But either way, the removal of these shells, even when the organism inside them might be long dead still ends up affecting entire biodiversities and habitats of such creatures that need not also be exclusively those confined to the precincts and vicinity of their marine homes. The ways in which such destruction manifests can also be diverse- from robbing organisms of their natural homes to depriving some other species from taking shelter in abandoned ones, seashell harvesting perhaps is more than just an activity illegal under the laws of the land. Amounting indeed to some kind of sin as you would be inclined to believe even if you are amongst the most sceptical of believers of any religion, you would know just why collecting seashells could be so evil. And yet, despite everything seashells are not just collected in massive amounts but also moulded into many an items of religious significance, manifesting therefore yet another irony abounding the ways of the human world.

Also resting in tremendous potential emerging from the human fancy for all things grandiose that which leads to overexploitation of shell studded sea creatures, among many others, is the pathetic prospect of entire ecosystems being wiped away due to the interdependence existing among species as regards their very existence. Other equally troubling ways in which these possibilities can come to the fore of reality can be through an impact upon shoreline erosion patterns that works in conjunction with other human induced aberrations like climate change to further destroy ecosystems and their species to such extent and pushing them to such limits of their existence from which there can be no return. The viable means therefore to ensure that seashells continue to beautify the earth with their glorious presence and in turn also continue to sustain many a lives even with their tiny but standout identity is by resorting to ecofriendly ways of seashell collection and to regulated extents so that these things of immense beauty continue to be universal and eternal harbingers of joy forever. 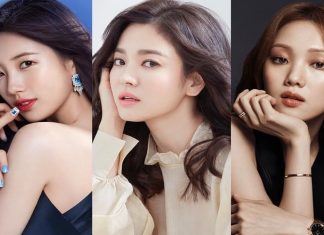 Top 10 most famous Korean actresses in the world