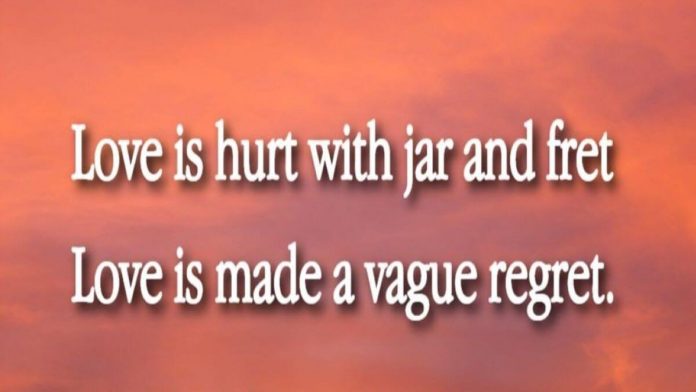 How vague are the vagaries of love! While the mere mention of love does not likely conjure up dystopian views of its lurking perils, it indeed is as much a truth held in essence that love tends to be quite a quirky working of the myriad matters pertaining to the heart. However, love turns out rather to be somewhat manifestant of a malaise, magical somehow, but never in the least as an aberration of what we do not seek to associate it with. Although it isn’t every time that love reveals to us in a shade of red so deep it almost gives off the masquerading that had been efficiently brewed in the depths of the black, it however still is a terror universal that falling in love is very much akin to falling from glory.

Even at the risk of coming across as dark and depressed and psychotic even, we remain unwavering in our profession of what love hides under its rosy hued pigments of the magical that entrances the world to no end with their sparkling premise. And yet today, what we seek to dwell in is not how love can be brutal, evil even, at times. That is something the world has had enough of and will continue to do so as long as love manages to find its own captivating way into the lives of all, till eternity that is to say. And as you and me and a million others like us still covet deeply that once in a lifetime feeling of hazy brilliance, of cool cosiness, of such emotions constantly in conflict with each other, believing still in the dictum that love is life seeks to hold, what we remain unaware of, in appalling ignorance that still comes across as ‘cute’ in the naive innocence that love leads us to, is a realisation rather perceptive. That inspite of all our belief in the universal nature of love and how it touches all and sundry with its gravitating depths and even in its fleeting transience, and how despite being a feeling shared by all love is surprisingly but sufficiently vague in its many stemmings.

How love tends to be vague despite its vehement assertion of being a feeling that encompasses one and all, without any differentiation made on any basis whatsoever, is something that is not very obvious without some contemplation of it. Yet as we rarely regard love beyond the feels it endows us with and as we stick to feeling it indeed in all its essence and do not indulge in the dissection of the emotions it imparts to us, we miss out on understanding love across all its forms. Love is vague not because how one loves is very different an experience from the other but because what we mean when revealing our love is something we aren’t entirely sure of. While love itself occurs as not a single entity, diverting instead to reveal such strands of its being that cater differently to the different people and relations and passions and aspirations that sum up our life, there still is a belief deep rooted about love, particularly as a holistic titillation of the senses. We tend to interpret in our own way the love that someone else feels, in terms of the love that we ourselves feel. But what love means to different people differs as well, and so much in context and intensity and essence that even in its universality, love ceases to be as widely accommodating a musing of the certains and the particulars.

Feeling love is one thing, interpreting it is another. I love you might mean anything from being completely obsessed with you to expressing that fleeting feel of a skipped heartbeat when you catch a glimpse of that someone you believe to have a connection with. It can mean also your fondness for anything, ranging from food and flowers to travel and parties and fashion and stuff. Love also comes easy in declaring your commitment to your job, your passion for a certain hobby, your zest for life, your rooting for your team and a whole lot of other experiences that life entails. In therefore being so widely used to mean an array of emotions ranging from anything to everything, however intense or extreme or tepid or barely there those may stand within the vast range of the heart, love comes across sometimes as intensely real and at other times as naggingly doubtful. How then do you define in clear terms a love that is universal in the sense of the term, in that it allows for making exactly the same set of feelings and emotions known to others as it does to you?

But perhaps that’s the whole thing about love. Love isn’t meant to be defined, it is rather meant to be felt and lived in, irrespective of the fact that your version of love might be poles apart from that of someone you perceive even as your absolute soulmate. Is it the mystery of love then or rather the treachery of it, that love never ever reveals the same to everyone. In even its condescending premise, if you allow us the liberty of being as brutal as love can be at times and indeed is in surprising frequency, love looks down upon us with similar grimaces of its being, even when never being the same for anyone ever. Love can be as much a safe word as it is a deeply felt emotion. Think of all the times you just chipped in with ‘I so love this (whatever)’ while struggling to find that exact word that might have appropriately described the enormosity or otherwise of your perception. Think also therefore of the time proclaiming your love was an escape like when bae was really angry and all you had to do was mutter some sweet nothings with a quick I love you added for effect.

To that extent therefore, love isn’t just vague, it is vaguely but shrewdly diplomatic as well. Waxing eloquent therefore about love in all its mavericks feels so much like an appeasement of the senses, over looking instead the harm we inflict on our souls. Even in its harm, love is no less vague and thereby abstractly obtuse through the impact it has upon beliefs and lives and existences. To equate love with divinity, like the world has so often equivocally adhered to in starry eyed adulation of the brilliance that love professes to possess, comes across as too fancied a vision of an emotion that transgresses the norms of the normal. For while love should have been ‘normal’ in it being the basis for the sustenance of the universe, not just in procreation and the like but also in proclivity to nurture and harbour the good of all, it ends up instead as a prejudiced norm of existence, one that believes more in the professing of it in absolutely ephemeral but intense terms than to seek succour in its essence as an innate stemming of perceiving souls. In all such manifestations of love, whether it be in its universal proclamation or its refusal to lay itself down to norms, love still tends to be as vague a realisation as can be.

But while love remains mired in uncertainty owing perhaps due to its cherished nature as the magic that works its way to miracles, it is somewhat comforting to note that humankind has throughout its presence as different identities in different parts of the world, still made allowances for the many vagaries of love, despite how indistinctly they might reveal to us. Perhaps to say, it isn’t love at all that is vague. It rather is our understanding of its nature only on the surface of it that works to make love more incomprehensible across its wide spectrum of manifestations. Struggling to put exactly how we feel in words that might portray the truest nature of our emotions, we recourse to the convenience that love, in all its generosity, seeks to impart and inculcate. In the language constraint that we have restricted ourselves with, it however is heartwarming to unfurl such poetic ruffles of the vocabulary that portray the many different aspects of love through such permutations and combinations of the alphabet that while might cater to the linguistic permits of a certain region but encompass exactly what our mighty heart tends to feel across its vast range of comprehending exquisite emotions. In such words that might be untranslatable in their literary but are every bit as universal in that how commonly they occur to everyone irrespective of whether or not they possess the play of the poesy to state it, our realisations come enriched with a whole lot of such expressions that capture the true essence of every love as they come. Be it the first euphoria of love forelsket that the Norwegians have mustered up a word for or the Turks’ Kara Sevda or black love through which they intend to bring out the darks of a love unreturned or even terming the second stage of being in love as Alaaqa in Arabic, love finds itself rendered relatively less vaguer with the interplay of such lucidity of the letters that leaves it all the more desired and dreamy. In tending to be not so hazy therefore, while persisting still with its misty magic and salubrious stupor that which paints the whole world different shades of red, the many vague vulnerabilities that shrouds love turns also to be yet another means of reveling in its splendor. In its existence that spans the origin and evolution of the earth and all earthlings and that sees as many elucidations as there are emotionally perceptive and lovely beings living on it, love persists and permeates despite all perplexing notions of its panoramic expanse. In being universal even in its vagueness, even a lesser love can well triumph its greater evils to explain why exactly it is that inexplicable feeling we return to again and again in our pursuit of living the life of our dreams. ARTISTS ADDED TO THE LINEUP FOR BACARDI NH7 WEEKENDER PUNE 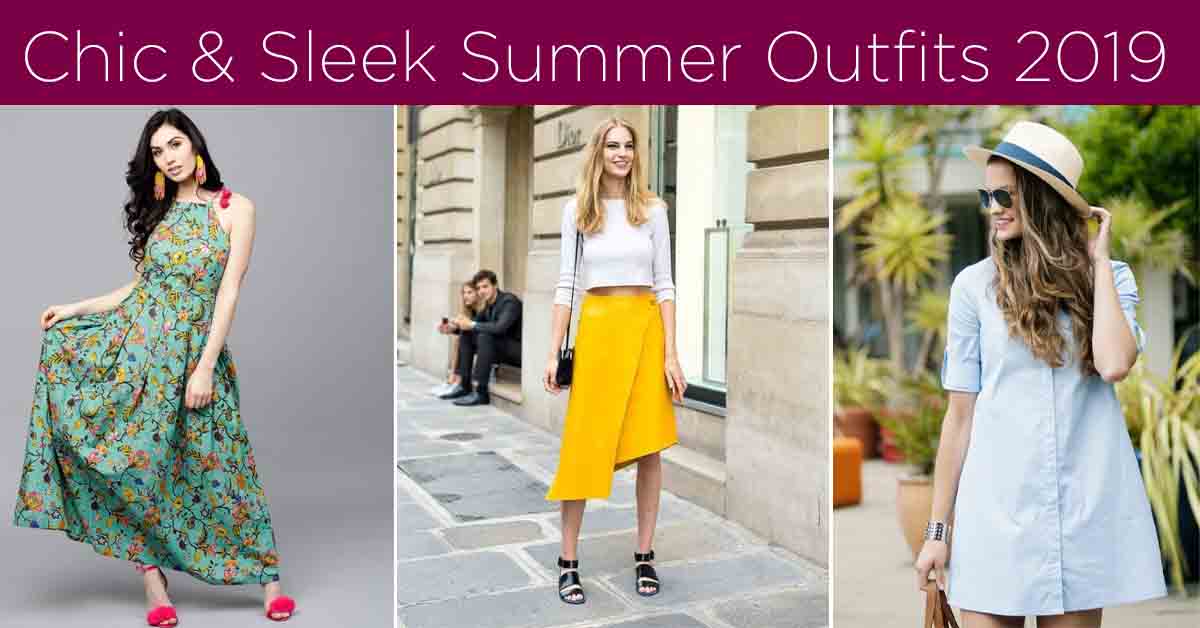 42 chic and sleek summer outfits for you to try in...