For people who believe in exploring every zenith for that shot at glory, obstacles and hurdles don’t count. So much so that they sometimes venture out of even the daring zone, risking life and limb but achieving a certain kind of ‘immortality’ that only risk can endow.

Cut to Tuesday’s episode of America’s Got Talent and that’s exactly what you will feel and realise as you see a power couple testing the extremities in a spectacularly jaw dropping performance.

Acrobats Tyce Nielsen and Mary Wolfe-Nielsen dazzled in a gravity defying act of splendor and heroics, keeping judges and the audience on loop through the entire duration of their performance, and managed to awe with a terrifically frightening climax.

A blindfolded Tyce Nielsen got it wrong at a time when it mattered, as he failed to hold onto his wife as she exhibited a stunning free fall mid air; nevertheless Mary managed to escape just fine- with even a smile- as she rose from the fall with a face beam that resonated with every soul in the studio.

And even as an apologetic Mary offered to redo the climax for a perfect performance, she was intercepted by the judges who termed their act incredible, while calling them only human to succumb to errors.

And the fact that Nielsen has Keratoconus (a disorder in which the cornea, the eye’s curved, transparent outermost layer, becomes thin and changes into a cone shape that distorts vision) made their act even more sentimental.

And even as a visibly shocked mother of the couple along with their two year old son looked on, the couple exhibited tremendous strength and skill to woo judges and advance to the next round of the competition. 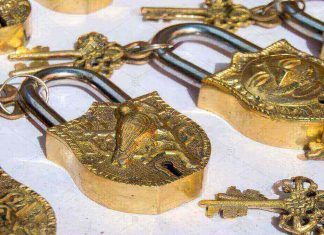