She was drenched by the pouring rain………..
drunk was the rain….
And endlessly she danced
In the rain she danced ………(anonymous)

The rains lashed the skies, the thunder, the lighting…..kaal boishakhi again. The dust rose once again turning the world into a restless soul, desperately trying to match her soul with the world, Brishti remembered that she was soul less; she had sold her soul to buy love. Strange was the word that everyone used to describe her and yes she really was strange. Her friends were fascinated by clothes, cars and good food but Brishti’s fascination was trees. As a child she had loved and lived on the guava tree that grew in her courtyard. She had even slept among the branches; she had played “paanwala” with its leaves and suffered bites from the resident ants of the guava tree. She had always wondered out aloud as to why the red plums came from plum trees that bloomed pink flowers and the yellow plums came from the plum trees that bloomed white flowers. Her mother had hurriedly explained to her that the next darker shade of pink and white were red and yellow and that’s why. Her lunch hours in school were never spent in the canteen but she had relished the cucumber sandwiches and bananas under the fir trees with its spiny needle like leaves, she shivered even now at the mere thought of the mist covered rows of pine trees which had stood the trial and trust of time. Her first encounter with the red rhododendrons, she always felt that these flowers lost their beauty at close quarters, otherwise bewitchingly beautiful at the high mountains. Brishti had anyways never liked the rhododendrons – the bewitchingly beautiful flowers always overshadowed the trees, too many songs had been written about them…..She had forever lived another moment in time, had listened to the music of the rains, had filled her room with fresh fragrances from the Giant Magnolia tree that grew outside her window, the perfect white flowers would bloom once in two – three years but the fragrance that they left behind was enough to freshen her room till the next bloom. Her mother always cursed the Magnolia saying that the day its roots reaches the centre of our home we will all be gone, the snake tree she called it, but she too knew it was not for real, Brishti’s grandma had always used this tree as a place for discarding the stale puja flowers. After her grandma’s death, the Magnolia was shorn of its branches to the helm that she never experienced the fragrance ever again. Travelling elsewhere in another moment of time Brishti did once again see the white Magnolia flowers but it was down a hillside too far away to garner the fragrance, she had asked many a fellow passengers from the locality as to whether this tree bloomed its white flowers once in two – three years but no one knew and no one even wanted to know.

The day she sold her soul she was in another earth zone in another world ready to buy the love of a different landscape, a place as green as can be, in fact she bought the love that the trees sold to her. It was the month of “phagun” with the “sal” forests burning from its blooms and it was also the first time she had seen the “sal” trees blooming. Soul sold and love bought under the sal forests pushed Brishti into the brink of oblivion. Thereafter she lived for poetry, cinema, rhythm, adventure, romance, rain, tea, books and all other things small, inexpensive and beautiful. Whether it was Rabindra Nath Tagore’s “Bokul” tree under which someone danced to someone else’s tune on the flute or the great “Nahor” tree which provided a home for the hundreds of birds in the evenings, every little thing became a matter of perception. She still vividly remembers the story of a blind man who gave up his palatial bungalow and instead let the pond and the giant “Kadam” tree to be so that the birds did not lose their homes and the “para” children their childhood games of catching tadpoles in the pond.

There was plenty that Brishti had not known like the “Koroi” tree could not be burned because it was fire resistant, she did not bother as to what made it resistant to fire but she was just fascinated by the thought that it did not burn down even in the worst of forest fires. Brishti sometimes even wondered if fire was required to create the flames, for she had now seen stretches of skylines ablaze with the red flaming flowers of the “Krishnachura trees” heralding the onset of spring – the season of youth. Somehow the rhododendron and the krishnachura flowers found themselves on the same platter of her likes and dislikes for she still thought that the flowers outshone the trees and that too many songs had been written about them.

She continues to live in another moment in time, listens to songs on the radio, searches for music in the rains – because it just doesn’t rain like those days, raincoats are out of fashion only for this reason she feels. Her room still fills with the fragrances of the flowering tree outside her window but the frangipanis have replaced the magnolias and the fragrances too have become short termed, annual you can call them. Still life goes on……….

The storm had passed, light clouds flirted across the blue skies along with the smooth breeze but Brishti stood still feeling the raindrops even then. The dew drops from the branches of the “shirish trees” felt more like rain, little did she realize that she was standing under the trees named after her – the rain trees…….. Do you think Bollywood Heavyweights are waiting for Kangana Ranaut’s career... 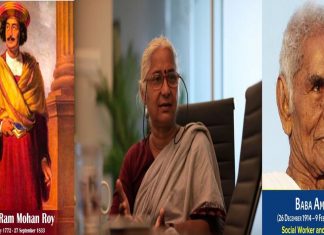 Indian social reformers whose works can never be forgotten