The world abounds in many places of tourist interest- both in locations and in manifestations. Iconic structures rule the realm of touristry interest, both in their magnificence and in significance. And it perhaps is an ode or a play upon such impact that many a famous world monuments have been replicated world over. Here are some such very famous monuments that are tourist attractions and their lesser famous replicas-

One of the most prominent tourist attraction of the world ever since it came into being, the Eiffel Tower is a very famous landmark that stands in the French city of Paris. An exquisite specimen of architecture, the Eiffel Tower also finds adulation in popular culture as being the symbol of love. Going down on one knee with the iconic monument at the background is the ultimate way to profess love for many die hard romantics. Needless to say therefore, the most visited paid monument has been replicated throughout the length and breadth of the world.

Even when the Eiffel Tower has been replicated numerous times around the world, none of them is as striking as the one that came up in Mexico’s Durango in 2007. Known as the Torre Eiffel, this some 60 meters high monument might be just around 1/6th of the original but there’s no denying the magnificence it is in its sightly presence. Interestingly, the French speaking community of Gomez Palacio donated this replica to Durango, which stands to this day as an impressive manifestation of the iconic structure.

Another impressive replica of the Eiffel Tower stands in China’s Shenhzen city inside the Window of the World theme park. Erected as a 108 meter tall structure, the Eiffel Tower here stands in close proximity to nearly 130 reproductions of other famous tourist attractions and has been up and about since 1993.

A monument of as much mysterious undertone as of historical significance is the tomb of King Tut in Egypt’s Valley of the Kings that has been enthralling tourists and history enthusiasts alike with all the buzz doing it up since forever. But even the rumoured curse said to befall all those who dares to encroach upon Tut’s death enclosure could not prevent makers from coming up with fancied replicas of the same.

Such is the fascination of the original Tut’s Tomb that a replica version of it came up withing Egypt itself, in the city of Luxor. Minus the mummy of course which still remains preserved in the original. Built to protect the original structure from too much of the tourist footfall, the replica was created by scanning the walls of the original in 2009 and includes an identical underground structure and tomb wall surface.

This one comes with official sanction from the Egyptian Ministry of Antiquities and stands in the Las Vegas Natural History Museum at present after being donated by the Luxor Hotel. Four perfectly recreated rooms and some 500 recreated artifacts but again of course, no mummy, this one gives you traces of the ancient mystery within the contemporary fold.

Another very prominent structure that has been inciting tourist interest for centuries is the Leaning Tower of Pisa in Italy that is world famous for its nearly four degree lean. This very unique monument also has had its moments of being ‘inspiring’ (even without ‘holding a firm ground’, pun intended) as it is replicated as the Leaning Tower of Niles in the United States of America.

A half- size replica of the original 183.3 feet tower in Pisa is the Leaning Tower at Niles which has been around for quite some long since 1934. Believed by some to have been built as a commemoration of the 600th anniversary of the Leaning Tower of Pisa, this one just outside the city of Chicago is also a prominent tourist attraction.

Taking the baton of commanding an astounding number of replicas from the Eiffel Tower is the Statue of Liberty that stands high in the US. Easily the most visible monument in the States aside from being also one among the most significantly popular, the Statue of Liberty was itself a gift to the US from France and is a huge tourist attraction. This UNESCO World Heritage Site has been gracing the US skyline since 1886 and has well over some hundred replicas the world over.

The Statue of Liberty in Norway was constructed as a tribute to remember the over 28,000 kilos of copper supplied by the village of Visnes to make up the original in America. A minuscule four meter tall figure as compared to the 139 meters original structure, the statue at Visnes might be insignificant in size but sure bears a lot more significance in essence to be a worthy replica of the iconic American image.

The present replication of the Statue of Liberty at Japan is in fact a work upon an earlier existing replica! The very oxymoronic ‘original replica’ was erected in Japan in 1998 to celebrate the nation’s ties with France. However it had to be erected again when it was taken down the following year because the replica had already gained mass popularity.

The 12 meters high replica of the Statue of Liberty came into being in 2004 to commemorate the 100th anniversary of the death of the architect behind the original, Frederick Auguste Bartholdi at his city of birth Colmar in France.

The eternal monument of love, Mughal emperor Shah Jahan built the Taj Mahal in memory of his loving wife Mumtaz Mahal and has been standing in India as a popular tourist attraction since the Mughal era. In its stunning architectural manifestation in marble and also the legacy behind the monument, the Taj has been attracting tourists from all over the world with its magnificence. While there exists replicas of the Taj Mahal in quite a few places around the world, including some couple within India Itself, it is the one in the Dhaka region of Bangladesh that is the most striking replica of its kind.

Bangladeshi filmmaker Ahsan Ullah Moni built the Taj Mahal Bangladesh to exist as a tourist attraction for the people of the country who could not afford to visit the one in India in person. Under construction since 2003 and completed in 2008, the replica utilised machinery for its construction which is why it was completed in a mere five years time as opposed to the span of 22 years that it took to come up with the original masterpiece.

One of the Seven Wonders of the World, the Colosseum in Rome is an iconic symbol of the nation that has been in existence since sometime around 70- 80 AD. A very prominent tourist attraction, in fact the most popular of the world in 2018, this oval amphitheater has been replicated several times over.

Las Vegas sure has more enchantment up its sleeve than just its many casinos. So after the enticing mystery of King Tut’s tomb is the extravagance of Rome’s Colosseum replica that works as a theater house there. Scaled down obviously with a seating capacity just about 6- 8% of the original, the Colosseum look alike at the Caesar’s Palace in Las Vegas however still fetches enough tourists.

With its indubitable reputation of replicating almost every iconic structure up somewhere in the world, China indeed leads the world in replicas. And its colossal Colosseum replica stands in its region of Macau at the Fisherman’s Wharf. A former Portuguese enclave that is now an entertainment park, the Chinese Colosseum seats 2,000 people as compared to the original with a seating capacity of around 50,000 to 80,000 spectators.

The carnival city of Rio De Janeiro in Brazil is most famous for housing the iconic statue of Christ the Redeemer which is also one of the Seven Wonders of the World. The 38 meter tall structure of Jesus Christ is a very prominent symbol of Christianity and has been standing with its arms wide outspread for quite long since 1931. Replicated or at least closely depicted well over 30 times, the very epochal Christ graces locations in several countries of the world.

A 25 meter tall replica called Christ the King stands at Almada in Portugal’s Lisbon. The statue was conceived by Portugal as a monument to express gratitude for being spared the ravages of the Second World War. Erected on an isolated clifftop 133 m above the sea, overlooking the Tagus River on its left bank, the Cristo Rei is a definite draw from the original in Brazil, which incidentally was a former Portuguese colony.

Inspired by the original in Brazil as one of only four in the world, the statue of Christ the King in the African nation of Angola is a 30 meter high structure made of white marble and is an Angolan World Heritage Site.

The Great Sphinx of Giza, Egypt

One of the oldest and largest statues in the world is the Great Sphinx of Giza in Egypt, that was carved out of a single limestone. With the majestic Great Pyramids at the background, the Sphinx is one very standout feature of Egypt and is a dominant attraction for tourists the world over. Supposed to have been built in approximately 2500 BC for the pharaoh Khafre, the Great Sphinx has been controversially replicated once again by none other than the Asian nation of China.

At about the same size as the original, China’s replication of the Egyptian masterpiece is a concrete structure that stands at a theme park in North China’s Hebei province. However, the recreation has not gone down well with Egypt and after a UNESCO complaint, China had to pull down its version of the Sphinx. It resurfaced however some years later that yet again prompted a “furious” Egypt to file yet another complaint with UNESCO.

Not just an architectural marvel but also the largest church in the world, the Saint Peter’s Basilica in Rome’s Vatican City is the burial site of St. Peter, the first Bishop of Rome. With a couple of replicas, this phenomenal attraction reinstates its significance as a monument that has been capturing the world fancy since 1626.

Basilica of Our Lady of Peace: Yamoussoukro, Ivory Coast

While the replica at Ivory Coast isn’t the only interpretation of the Basilica around the world, it certainly is the most curiously significant. Not just an exact replica but in fact bigger than that, the famed Basilica of Our Lady of Peace is big enough to even overtake the original as the largest church in the world. Standing since 1990, the media dubbed this replicative structure as “Basilica in the Bush” due to its locational presence. Interestingly, the Basilica wasn’t just an ode to God but also to its creator, the then President Félix Houphouët-Boigny who led the country during a period of its economic boom (the Ivorian miracle) and therefore features a picture of the latter beside Jesus in one stained-glass panel ascending to heaven.

A scaled down version of the St. Peter’s Basilicia stands in Montreal at about half the size of the original. The Mary, Queen of the World Cathedral as it is popular, the structure came into existence in 1894 and is a very prominent ornate Renaissance cathedral in the region.

A massive carved structure that has the faces of four erstwhile US Presidents, the Mount Rushmore structure towers from the Black Hills in South Dakota, United States. A phenomenal tourist attraction, that which draws some 2 million visitors annually, this monument known also as the Shrine of Democracy finds replicative interpretation in China.

In China’s Chongqing region, the Mount Rushmore replica came into existence to honour the American victory over Japan, with which the Asian counterpart was at loggerheads. Though present conditions of the copy are quite staggering with the powerful men unwittingly sporting leafy heads, it still remains otherwise intact amidst similar other derivative replicas of famous world sites. 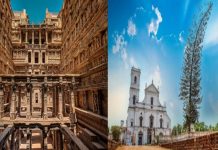 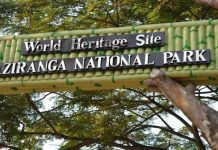 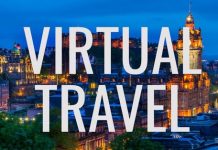