INNFINITY
Home Travel Soulin’ along the Siyom: Of the mist, mountains and Mechuka….. You either got to be trippin’ or soulin’ to be on these rugged  “no roads” to the mystical valley of Mechuka – nestled among the foothills of the eastern sub himalayas along the banks of the river Siyom. A short two hour Alliance Air flight to Pasighat from Guwahati is the shortest entry towards Mechuka, experience however urges you to take the longer journey by road considering the cancellation possibilities of the flight. The rice fields of the Pasighat flatlands merges unto the gradual gradient towards Aalo or Along. After a four hour drive through potholes and no roads you arrive at the new tourism complex built on the banks of the Siyom river. Clean rooms,cleaner towels, a cold coffee to die for and the gushing Siyom…you are more than ready for the souling trip of your life….thereafter its just the mists..the mountains…and Mechuka….. 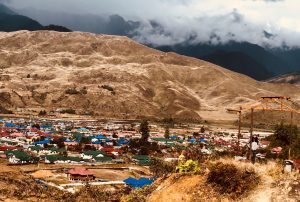 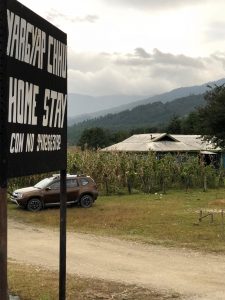 As one descends unto the grass meadows of Mechuka, a series of tinned roof huts greets your sight, the colours varying from red to blue and some the original tin colored….these are the ubiquitous home stays of the valley which caters to providing the accommodation for all visitors. The huts are insulated against the biting cold with pinewood walls, floors and ceilings. A dining area with a self cooking kitchen is available as part of the home stay and if one is too lazy to cook then the owner Pasang Lakpa and his wife Dorji will provide you simple wholesome meals of rice, dal, local veggies, pork curry, boiled chicken, momos, ting momos, tomato and the local chilli chutney coarsely ground in a mortar and pestle like contraption made out of carved rocks!Yargyap Chhu home stay, a seven roomed accommodation  is located at the edge of a vast cornfield. With the room windows opening into the fields the bird watchers can even capture photographs of different species of avians from the warm reclines of their bed….

Of undulating hills and the unemployed horses… 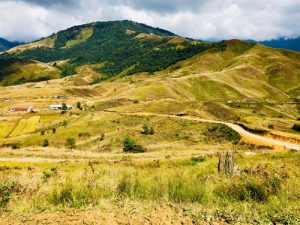 The undulating hills of the Mechuka Valley transforms from light green to the darker shade of green and to browns with the changing hues of the sunlight. Though the look is of green lush meadows where you would want to roll around in the grass, these hills and meadows are slushy and always wet due to lower temperatures and humidity levels. The wetness remains almost throughout the year so these hills are more horse friendly than people friendly. The horses dot the hills and conjures an image of the Wild West Countryside with its wild horses, but the horses of Mechuka aren’t wild! All these horses dotting the countryside have owners and have been left to graze, loiter and stroll everywhere since they are basically unemployed, Its a case of too many horses and too less work. The local ITBP (Indo Tibetan Border Police) Deputy Commandant while explaining the status of these horses said, “We have stopped using these horses for portage of our resources and ration to the higher mountains since they refuse to cross the hanging bridges enroute, so now its human porters who carry our stuff thus making these horses unemployed..” So the next time you come across an Instagram post of some avid traveler as #wildhorses #mechuka, you can probably narrate this tale with a #the_horses_of_mechuka_aint_wild….

Of momos, millet and “chang” in the goblet…. 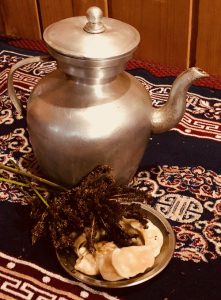 Influences of the Tibetan culture is starkly represented in the Mechuka valley, be it religion, festivals or food, we see a little of Tibet in everything. Momos are a local delicacy mostly made of chicken meat and served sans the soup but with a coarsely ground chutney of roasted tomatoes and local chillies. Then you have the ting momo – the momo without any filling, it’s actually a yeasty sour dough steamed bread eaten with almost anything from sauteed fresh beans to a masaledaar mutton curry. Besides corn and buck wheat which is extensively grown in the valley and relished on the plate as rotis, crepes and as a roasted powder eaten with milk or tea for breakfast, millet or “Khodo” in local parlance is also grown. Millet powder is sometimes used for making rotis or bread but the mainstay for millet is as a basic ingredient for the preparation of the local alcoholic brew – the “Chang”. The drink tastes similar to the rice beer but has its own character in terms of a unique smell and flavor which is more on the acrid side. Served in special aluminium colanders and poured constantly into your half filled glass or goblet, drinking the Mechuka millet “Chang” besides a wood fire is all that you do on almost all evenings in the valley….

Of mountain streams and the bailey…. Streams gushing with crystal clear chilled water crops up at every turn the road takes up the hills. These forceful jets of water probably joins the mighty Siang at some point of time, known as the “jhoras” locally these streams fuels not only the drinking water reservoirs but also the local hydro electricity plants generating minimal wattage of electricity for lighting the homes of the valley. Mostly the stream water runs on the surface of the earth and forms deeper rivulets only at certain points of the landscape with the good old baileys providing the connecting link at all times. These olive green portable truss bridges, developed during the 2nd  World War by one Donald Bailey is still widely used in the Mechuka valley for connectivity. The advantage of the Bailey over other bridges is that these do not require any special tools for erection and maintenance. Having been romanticized in movies like the 1977 war epic “A Bridge too Far”, the Bailey is however seen to be slowly replaced by ugly concrete contraptions…a developmental hazard which is of course unavoidable…..

Of cornfields, pakoras and the puchkas…. The Mechuka valley spreads wide across vast stretches of cornfields, corn inevitably becomes the staple diet of the valley people. Cubby holed at one street corner of the small town is a “chai ka dukan” which the owners’ insist on calling a restaurant – “The Phusang Restaurant.” Serving piping hot corn pakoras, namkeens, jalebis along with puchkas made of corn, this hole in the wall eatery has a history of its own…Mohammad Arif and his wife Jannat has set up this chai dukan in the year 2013, Arif works as a washer man in the local hospital and the shop is manned by Jannat who laments…”I always wanted this restaurant to be named after me as “The Jannat Restaurant” but the local practice made us name it after the owner of the shop.”Hailing from the Chapra District of Bihar, Jannat and her husband are second generation Biharis living in the Mechuka Valley. As a parting shot and doning the indomitable entrepreneurial spirit, Jannat promised us a proper sit-down restaurant during our next visit to the valley. In case you go looking for “The Phusang Restaurant” at Mechuka…don’t..there are no signages…just ask for the chai dukan which serves corn puchkas…

Of smoky chai and the bukari…. When it’s cold…it’s cold and when it’s not..it just gets colder…winters are hard at sub zero temperatures and the saving grace at all cold times is the smoky chai. Normal milky sweet tea brewed over smoky wood fires served in quaint mugs with bright painted dragons makes your day! Dip the crunchy rusk biskut into the smoky brew and be sure of a heavenly feeling of comfort as you watch the flying tinders from the fire burning in every room of the household in solid iron contraptions called the “bukhari” – the wood fired ovens where you warm your toes and roast your potatoes too….

Of long winding roads, photographs and the hooded soul…. Mechuka as a tourist destination is almost only about the picturesque beauty and a close connection with the nature, adventure sports and paragliding are restricted only to the times of the organised festivals, maybe for a week or so in a year. But you can always befriend the guys from the border forces and try a hand at missile firing at their practice ranges! There are also some arduous treks upto the old monastery or gompa and the Mechuka lake for the more adventurous travelers. The landscape offers a photographer’s delight and bird watching too could be an option. All roads in the valley are long and winding and makes you realize the uncertainty of life…what crops up at the next turn could be a beautiful mountain stream or an ugly landslide accelerated road block but the spirit of the valley people offers the soul to the trip. The valley has a single doctor against almost two thousand people, no facilities for medical tests and X-rays and if you break a bone then you will probably be airlifted in a helicopter if you can afford the price or else you traverse the entire no road distance to the district headquarters at Aalo or Along and break a few more joints before your broken bone is patched up. Still the smiles on the faces of the valley people are the most beautiful in the world…

Of souling and the Mechuka valley….. If you are not a photographer or a trekker then souling is the only reason you should pack your bags and head for the Mechuka Valley…you can just sit for hours staring at the undulating meadows of green grass with the grazing, lazy horses dotting the scene. The skies are either blue or grey and nothing in between so you either relish the clear blue skies with flecks of candy floss clouds or get immersed in the mists or fog which invariably opens into the muted sunlight hues giving both space and time a genre never felt anywhere in the world. At Mechuka your soul reverberates with the sounds of nature…the early morning bird calls. the howling winds as it surges through the tunnelling effects in between the hills, the gushing streams whooshing against the rocks, the booms of the missile firing in a distance and the fluttering of the prayer flags…the essence of the valley is in its sounds and you could close your eyes for hours listening to all these while rejuvenating your soul with nature. Do leave behind your earphones and your baggage..both physical as well as mental while traveling to Mechuka…it’s a place where you realize that there are places on this earth where people live with so less yet have so much to give you in terms of living while enriching your soul which is perhaps the ultimate need of all humans on this earth….

You may also like: Exploring the North east through photographs and words Doting Dad wins over Internet with his Parenting Done Right!